Thanks to Bluebus we can provide the following outstanding background check on this example:

The Cessna 305 was designed as a two seat tandem military observation aircraft – to replace the Piper L-4 and Stinson L-5. Cessna offered the Model 305 which was based on the Cessna 170 wing with modified flaps and a Cessna C195 tailplane on a newly developed fuselage with a Continental O-470 engine. The first of what became the Cessna L-19/O1-G Bird Dog flew on 14-12-1949 followed by nearly 3500 others. A fifth example enters our register as a Cessna 305A with the registration of ZK-DAJ2 for The Strome Farm Trust of Drury. This was built as an L-19A, with a build date of 13-05-1952, was given the US Military serial number of 51-12234 and delivered to the Wisconsin Air National Guard. After release from military service it joined the US civil scene as N427BS. By May of 2002 it was in the hands of Steve Noyes of Noyes Enterprises who rebuilt the aircraft and added a Bush Stol kit, wing leading edge cuffs, wing fences outboard of the flaps and drooping wing tips. It was painted in its US Air Force grey scheme and carries its c/n of 22548 on its fin and rudder. 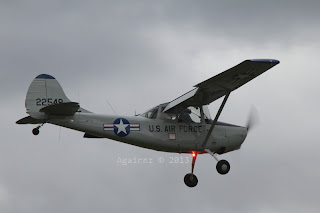