I was fortunate to be able to tag along with the Auckland Chapter of the Sport Aircraft Association of New Zealand (SAANZ) today, to visit Composite Helicopters International Ltd's impressive new facilities at North Shore Airfield.

Composite Helicopters have developed and flown the world's first all-composite helicopter - the  5 - 6 seat Helipod KC 518 Adventourer.  Driving forces behind the project are Peter Maloney, who is a licensed aircraft engineer and a director of the company and his wife Leanne who is the company's Chief Financial Officer, and who is also part of the build team. 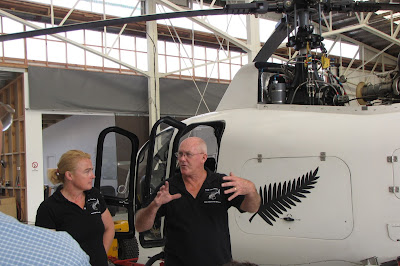 Above, Peter and Leanne explain details of the Helicopter.

The fuselage and rotor blades of the KC 518 are made entirely from carbon fibre, using the same technology as New Zealand's America's Cup challenging yachts. In fact Composite Helicopters has tapped into the carbon fibre design expertise that exists just up the road in Warkworth, where the AC 72 catamarans are built.  The helicopter also features a unique gearbox design that is simpler and lighter than current helicopter gearboxes.  Peter says that the KC 518 is a competitor for the Robinson R 44 and R 66 helicopters, but it is much cheaper at around US$450,000.  The engine is a Rolls Royce gas turbine which can be from 250 to 400 HP. 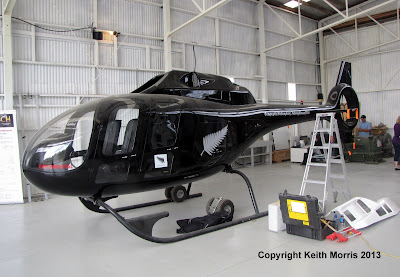 This is the prototype fuselage that was displayed at Oshkosh 2012, where several orders for the helicopter were received.

The fuselage is manufactured in a mould that Peter and Leanne built.  It is built as left and right sides which are then joined to form a monocoque.  Then bulkheads and the floor are added, to transfer the rotor forces into the airframe.  The helicopter will initially be offered as a kit with all the carbon fibre work completed, and will be licensed in the Experimental category. 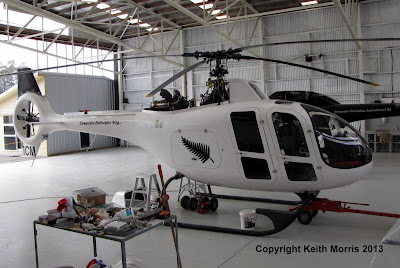 The first flying KC 518 is ZK-ICM (c/n 1). which was first registered on 30/9/11, and which was built in a shed at Peter and Leanne's property at Dairy Flat.  This view shows the sleek lines of the helicopter, which Peter based on the outline of the Great White Shark. 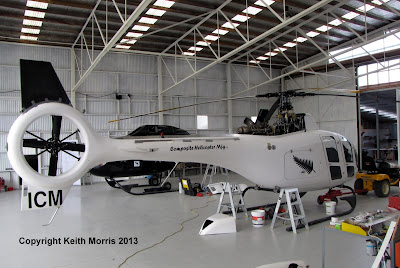 ZK-ICM has flown more than 200 hours to date, mainly in the hover, but in the last 3 weeks it has been flying circuits at North Shore airfield.  It has proved to fly very well and is also very quiet, partly because of the ducted fan tail rotor.

Peter said that the third helicopter will commence building shortly.

This is a very impressive machine, that is truly locally developed.  It is world leading technology on our doorstep!