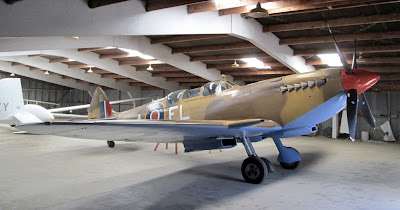 Supermarine Spitfire MkIX ZK-WDQ (c/n CBAF 5487) carried out a precautionary landing at Drury on 01-04-2013 whilst on its return flight from Omaka to Ardmore. During the landing it had a prop strike and now awaits new blades. (zoom in on prop tips in photo). It is still camped at Drury between the gliders until a new prop blades arrive. It has had an engine check in the mean time.