Three of Great Barrier Airlines Trislanders were outside at North Shore yesterday, in patriotic red, white and blue. 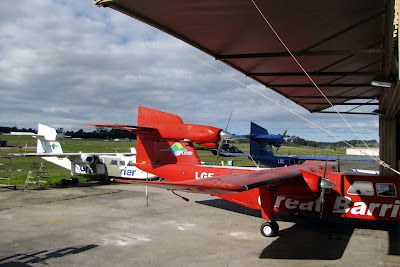 With its nose in the hangar was ZK-LGF (c/n 1023) while ZK-LGC (c/n 1042) was ready to go in the background.  Then there was ZK-LOU (c/n 322), continuing its long term repair after losing a propeller on take off from Great Barrier Island on 5 July 2009.  The propeller struck the side of the fuselage causing a major emergency and forced landing, amazingly without serious injury.  The repairs to the fuselage can be seen in the background.

Great Barrier Airlines have a lot of Trislander parts including spare fuselages stored in hangars at North Shore.
Posted by Sir Minty at 20:24