The Gere Sport Biplane was designed by American George Gere in the 1930's and plans were published in the 1933 edition of Modern Mechanix and Inventions magazine (This magazine also published plans for the Pietenpol Aircamper in their 1932 edition). 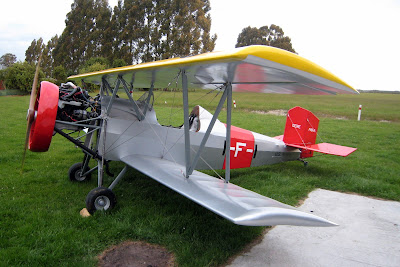 ZK-EFZ (c/n BEL-8) was built by Alan Belworthy of Cust, and was first registered to AB and EF Belworthy on 29/11/10.  From the c/n it is the eighth aircraft built by the Belworthys (Alan and Evan) and what an interesting collection these aircraft are! including a Pietenpol Aircamper from the same era - but that is several other stories.

Alan told me that he was browsing through old American books on homebuilt aircraft and he stumbled across the plans for the Gere sport.  This must have been the Modern Mechanix and Inventions magazine referred to above.  ZK-EFZ was originally powered by a 2 litre Cortina engine but it has been re-engined with a 2.2 litre Toyota Hilux engine.  Alan told me that it has successfully flown around 14 hours to date, and that he is looking to install a gearbox so he can swing a bigger diameter propeller.  The aircraft is painted in a 1930's US Navy Boeing scheme of the time.

Thanks to Evan Belworthy for the photo, which was taken at Cust. 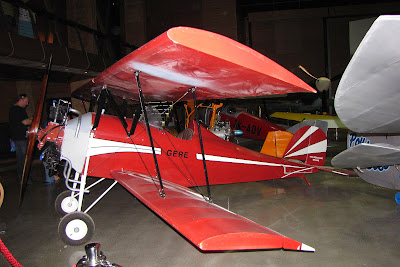 Gere Sport Biplanes are very rare, but surprisingly there is another one in New Zealand - at the Museum of Transport and Technology (MOTAT) in Auckland as photo'd above.  I really do not know much about it or if it has a prior New Zealand connection - can anyone help with more information here?