Volker Heydecke constructed his Heydecke H 16 at the Sailplane Services hangar at Drury. It is a two thirds scale carbon fibre replica of a Polikarpov I 16 with a Rotec 3600 3.6 litre radial engine. 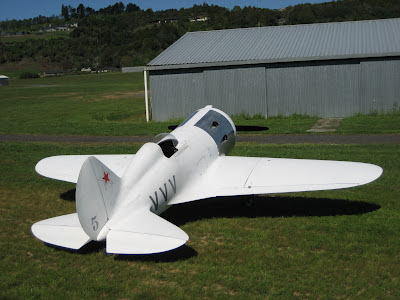 ZK-VVV (c/n V16001) was first registered on 3/11/08.  The above photo, taken on 15/11/08, was supplied by Volker and shows the aircraft at Drury where taxying tests were carried out.  Unfortunately it suffered an undercarriage collapse while taxying at Ardmore in late 2008, but it was rebuilt by mid 2009. 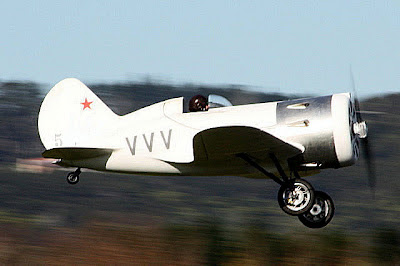 It was test flown at Ardmore on 15 June 2009 and this photo by Mike Condon shows it on take off on 17 June.  You can just make out the ballistic parachute deployment equipment around the cockpit.  There is a lot of information on ZK-VVV including video footage and photos, on the Rotec Radial website www.rotecradialengines.com/customers/VolkerHeydecke.htm

Sadly, it came to grief on 29 August 2009 while carrying out spin recovery tests South of Ardmore.  However, it was saved from a worse catastrophe by the deployment of the ballistic recovery parachute which certainly saved the pilot.  This is detailed in Mike Condon's post ZK-VVV Has Come to Grief! at www.nzcivair.blogspot.co.nz/2009/08/zk-vvv-has-come-to-grief.html   I think this was the first aircraft to be saved by BRS in New Zealand.

I am not sure of the current state of this aircraft but it is still currently registered to Volker Heydecke.