Airdrome Aeroplanes of Holden Missouri manufacture a wide range of kits of WW 1 and earlier aircraft in various scales, designed by Robert Baslee.  The range includes replica Fokkers, Sopwiths, Nieuports, a Bleriot Monoplane and a DH 2.  More recently they have gone to full size replicas.  Their aircraft can look pretty realistic as evidenced by the four Nieuport 17's that they built for the film Fly Boys (This film has realistic WW 1 scenes and good flying footage).

However one difference from the real thing is that all the aircraft are of metal tube construction and pop rivetted.  This makes them potentially quite quick to construct.  Two such aircraft have been constructed to date in New Zealand, as detailed below. 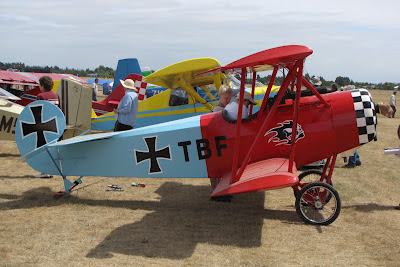 ZK-TBF (c/n NZ001), is a 75% scale replica of a Fokker D VI which was first registered to Dr G Ritchie of Ashburton on 16/6/08.  It is photod here at the 2009 SAANZ flyin at Ashburton.  The original Fokker D VI was only constructed in small numbers between April and August 1918, and it was quickly overtaken by the much better performing Fokker D VII.  ZK-TBF was sold to Greg Burt of Queenstown on 28/9/09.  For me, the scaling doesn't quite work even though in the photo 2 young boys are shown.  The fuselage seems too deep and the colours are probably a matter of personal taste - does anyone know if this represents a real aircraft colour scheme?  The photo is from the Keith Morris collection.

The Vintage Aviator has a full size Fokker D VI replica at Masterton but I understand that it is not one of their preferred aircraft. 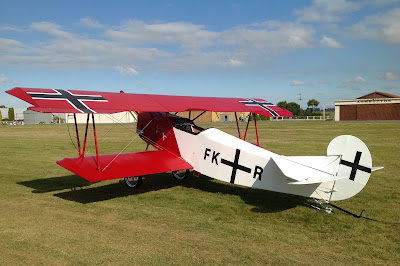 ZK-FKR (c/n NZ 101) is an 80% scale replica of a Fokker D VII which was first registered to Greg Burt of Queenstown on 1/3/12, making hima double Airdrome Aeroplane replica owner.  I understand that this aircraft was constructed by Russell Brodie at Rangitata Island.  It was test flown at Ashburton by Evan Belworthy.

Thanks to Russell Brodie for the photo (via Blue Bus), which is also at Ashburton.

The Vintage Aviator also has a full size Fokker D VII replica at Masterton, and it one of their most flown planes.