The next type of homebuilt aircraft to be registered here was the Bushby Mustang II.

After John Bushby bought the rights to the Midget Mustang design in 1959, he started to develop a two seat version which appeared in 1966 as the Mustang II.  The Mustang II is of riveted aluminium construction and can be constructed as a tri gear or taildragger aircraft.  The obvious comparison is with the Vans RV 6 or 7 which are of similar size and layout.  In a fly off with similar engines reported by AOPA the Mustang II was faster with its tapered wing, while the RVs have constant chord wings and better low speed performance which results in the Mustang II landing faster and quite a bit longer.  Of course the RV's have a track record of thousands built while there have been around 500 Mustang IIs built worldwide. 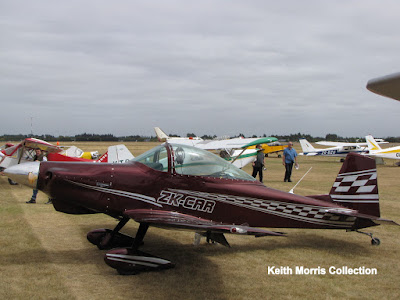 We have had one Mustang II built in New Zealand, ZK-CAR (c/n 1713) which was built by John and Trish Crawford of Christchurch and was first registered to them on 9/12/02.  It is powered by a Lycoming O-320 and was a six and a half year project.  I understand that the CAR stands for Coke And Rum.  ZK-CAR is photo'd above at the 2009 SAANZ flyin at Ashburton on 7/2/09. 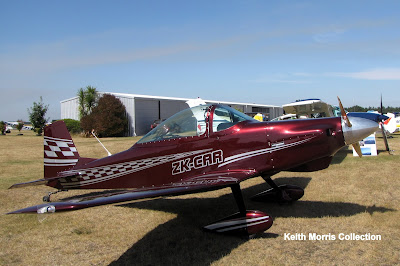 I think there is at least one other Mustang II being built in New Zealand, but we won't see lots of them.