The Just Aircraft Escapade has its roots in the Denney Kitfox and Avid Flyer designs, and it is produced as a kit by Just Aircraft LLC in America.  It is also produced in parallel in the UK by Reality Aircraft Ltd.  We have had just one example in New Zealand to date, Julian Thornton's ZK-SKP which was first registered on 24/6/09. 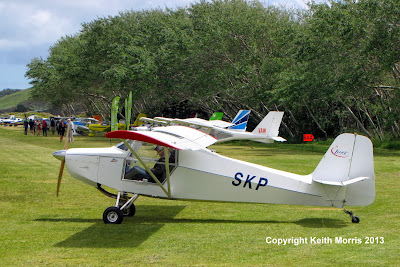 Julian flew ZK-SKP to the Black Sands flyin at Raglan on Saturday, leaving around mid-afternoon, as did we. 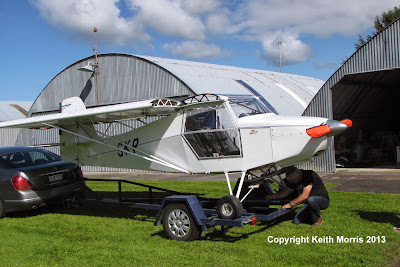 Then an hour or so later we caught up again with ZK-SKP at Te Kowhai, with Julian just having folded the wings and put it on its trailer.  A neat solution to keeping your aircraft at home.

Julian has posted some very professional videos of ZK-SKP (and some of his other aircraft) on You Tube.  (Just) search for Just Aircraft Escapade ZK-SKP.