The Todhunter Blue Wren is a very light homebuilt powered glider that was designed and built in Noosa, Australia by Reg Todhunter.  It was registered in Australia as VH-KYH and has the c/n of GFA/HB/106.  It is a 36 feet span powered glider that was built of fibreglass and foam with a aluminium tube for the aft fuselage.  It was originally powered by a JPX horizontally opposed twin motor of 23 HP with a recoil starter. 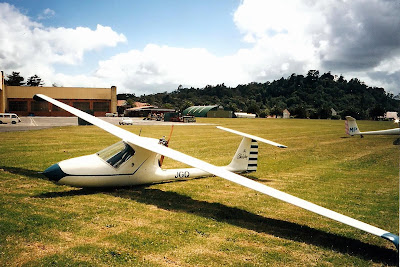 Sadly, Reg Todhunter died before he could further develop other gliders that he had in the pipeline, and the Blue Wren was bought by Neville Swan of Waitakere in Auckland who registered it as a Class 1 microlight on 20/5/96.  It is very light with a MAUW of only 290 Kg.  Neville installed a 3 cylinder Konig radial motor of 23 HP, which had an electric starter.  The above photo was taken at the Hobsonville Air Base. 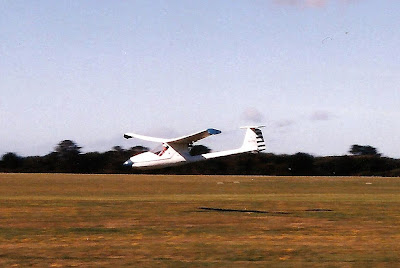 ZK-JGQ flew successfully as in the above photo, also taken at Hobsonville Air Base.  Neville Swan sold the Blue Wren to RB Goodchild of Taupo on 28/6/00.  I did once see it being taxied under its own power with a wing walker at Taupo in the early 2000's but I think it was inactive for much of its life in Taupo.  It was acquired by GD Ellery of Taupo on 20/10/11 and was for sale on Trade Me.  More recently it has been sold to Dave Baker of Greymouth (who has also restored the Anderson Kingfisher ZK-DJH to flying condition), so we might see the Blue Wren flying again.

Thanks very much to Neville Swan for the above photos.