Auckland Seaplanes' DHC-2 Beaver floatplane was out flying today, the first time I have seen it flying.  It was doing air to air shots with another aircraft over the harbour with Auckland in the background, and then it departed, presumably for more air to air shots over the Hauraki Gulf.  Look out for a photo next time Jim Hickey is doing the weather on TV 1?  The approach for landing was parallel to the Northern motorway with a 90 degree left hand turn to point down the harbour, and a quite short landing a long way from where I was. 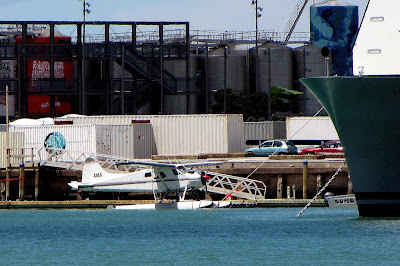 It is pretty difficult to get a photo where it is moored.  I thought I would post this shot showing the surroundings
Posted by Sir Minty at 16:17