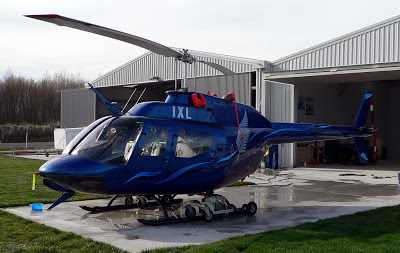 Jon Ludgater spent some time on Friday cleaning two of his aircraft. Above is the Bell OH-58A Kiowa ZK-IXL2 (c/n 44062). I recon it looks much better now it has some graphics applied.
Check out the earlier posting on IXL at :- http://nzcivair.blogspot.co.nz/2012/11/bell-kiowa-zk-ixl.html

NZ Aviation News had this to say about RVX when it first came on the register on 10-11-2009.
"Jon chose the RV-6 for its combination of cross country, grass strip and aerobatic performance with side by side seating and metal construction. It was built from a quick build kit which has taken a scandalous amount of time to complete, work kept getting in the way. It has the additional John Johanson  long range wing tanks, a EFIS for the pilot who sits on the right hand side to give right hand on control column and left hand on throttle, military style – which is where Jon came from – and a quadrant for the engine controls. Engine monitoring is via another LCD screen with all cylinders of the Lycoming O-320 wire up. It has airflow performance fuel injection according to the RPM and manifold pressure along with inverted oil and fuel ability, all connected to a constant speed prop. Avionics are a Bendix-King stack of GPA/COM, NAC/COM and transponder along with a mixer box. Jon is also a gliding man and operates the DG505 ZK-GBJ­2 (previously ZK-GPP)."

Also captured at Rangiora on Friday (31st) was the Forest Field based Cessna A185F ZK-NWH (c/n 18504426) of Phillip and Nicola Seale. A real interesting 185 with its turbo'd engine. It is also the first one I have seen with the modified manual flap lever. This saves the upper body bend and reach down to the floor for the flap lever, enabling you to keep your eyes ahead, 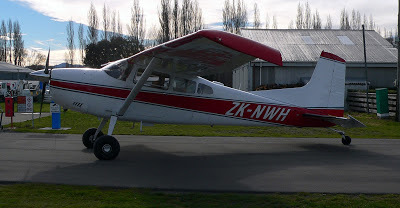 Below a view of the modified flap lever. 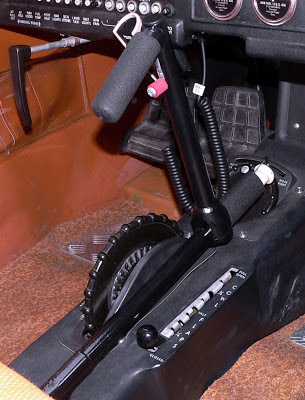 As an interesting aside. The registration ZK-NWH comes from its previous US registration of N714WH. Just remove the numerals and you have "NWH".
Posted by Dave Paull at 20:39