The next type of 2 seater homebuilt aircraft to appear was the Steen Skybolt.  We have had four Skybolts in New Zealand to date.

The Steen Skybolt was designed by Lamar Steen who was a high school teacher and it was designed as a high school engineering project.  The prototype was built by Manual High School in Denver, Colorado and first flew in October 1970.  It was "a bigger (Pitts) S2 for bigger pilots" and it was "the gold standard for 4 or 6 cylinder experimental aerobatic biplanes" (according to the Steen website!).
Its construction is standard with a welded chromoly steel tube fuselage and tail group, and wooden wings.  It is designed for engines from 150 HP to 260 HP.  Steen formed Steen Aerolab which still markets the aircraft today. 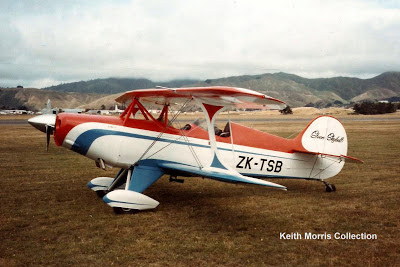 Our first Skybolt was ZK-TSB (c/n AACA/438) which was built by Bruce Thompson at Gisborne and was first registered on 28/3/83.  It is photo'd above at the 1983 AACA flyin at Paraparaumu.  It is still current with Bruce B and MN Thompson of Gisborne. 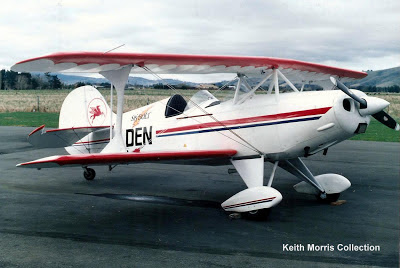 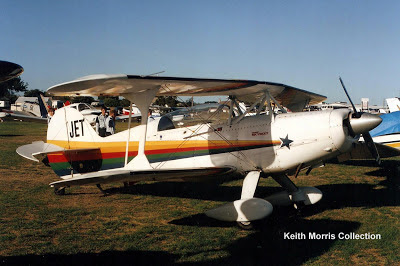 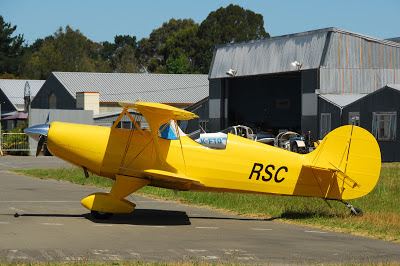 And our fourth Skybolt was ZK-RSC (c/n AACA/441) which was started way back around 1975 by Russell Truman in Auckland.  Sadly he was killed in a topdressing accident in 1979 and the project was eventually taken over by his brother Chris Truman.  He continued building the aircraft in the Auckland area and then moved to Hastings where ZK-RSC was completed  It was first registered on 8/11/01 and first flew on 22/12/01, at Bridge Pa.  The above photo was taken at Bridge Pa on 24/1/09 by Jean 210 and it can be seen that the aircraft looks magnificent - real gold standard!  ZK-RSC stands for Russell, and helpers Reg (Russell and Chris's father) and Ruth, then for Sue then for Chris, or alternatively Real Superb Craft.  ZK-RSC is still current and based at Bridge Pa, Hastings.