I have posted the background to the Flitzer biplane in my earlier post on Max Saunders' Flitzer ZK-FZR at www.nzcivair.blogspot.co.nz/2012/10/flitzer-biplanes-of-new-zealand.html

To recap, The Flitzer series of biplanes are nostalgic open cockpit biplanes designed to represent a mythical 1920's German design of the Staaken Aircraft Company of Berlin.  In fact they are designed by Welsh artist and long-time pilot Lynn Williams, who revealed the truth behind his prototype Z1 in an announcement on April Fools Day in 1996.  Flitzer means streaker or dasher in German.

I referred to Brian Anderson's Flitzer as being built at Havelock North in my earlier post and now it has been registered. 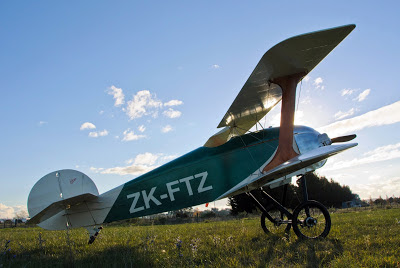 ZK-FTZ (c/n 092) was registered as a Class 1 microlight on 8/5/13 and it is the round fin model.  Brian has created his aircraft with an Art Deco theme in keeping with Napier being the Art Deco capital of the world, but it also has German touches.  In fact Art Deco was very strong in Germany in the 1920s and 30s so Brian's theme fits with Lynn Williams' original whimsy.

It took Brian 7 years to construct and power is from a Jabiru 2200 cc motor.  Another neat addition to the ranks of sport aircraft in New Zealand.  Thanks to Brian Anderson for the photo.
Posted by Sir Minty at 20:03