The Glasair II came along in 1986 with a wider and deeper cabin. It was further developed in 1989 into the Glasair II S with a 14 inch fuselage stretch, and then again in 1993 into the Glasair Super II S with a further 6 inch fuselage extension, the wing repositioned slightly aft and with increased tail surface areas.  It still could be built as a taildragger (TD) version, a fixed tricycle version (FT) or a retractable version (RG).

We have had 2 Glasair IIs in New Zealand to date. 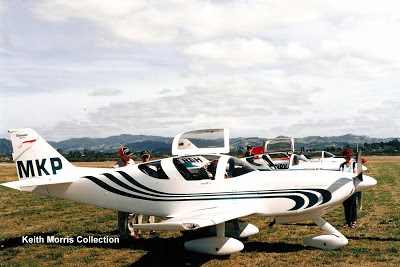 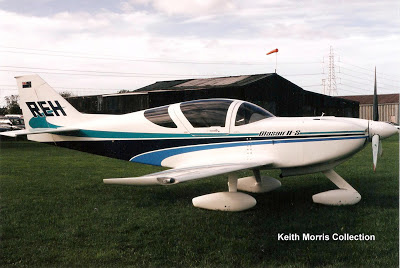 And our second Glasair II was ZK-REH (c/n 2138) which was a II S-FT model built by Brian Horne of North Shore.  It was registered on 26/6/02 and its first flight was on 7/9/02.  It was powered by a Lycoming IO 360 motor and had extended wingtips.  The above photo of ZK-REH was taken at an Auckland Chapter SAANZ flyin at Pikes Point in 2003.  It flew across the Tasman in February 2009, and was sold in Australia where it was registered VH-PND.  Its New Zealand registration was cancelled on 6/3/09.