The 1980s were a time of great variety in new types of homebuilt aircraft appearing, and the next type along was the Quickie Q2 which was the big brother of the Quickie 1 that I have previously posted about at: www.nzcivair.blogspot.co.nz/2012/05/quickie-1s-of-new-zealand.html

Quickie Aircraft Corporation was founded by Tom Jewett and Gene Sheehan in 1978 at Mojave, California to market the Quickie 1, Quickie Q2 and later the Q200.  The Q2 and Q200 were co-designed by Jewett and Sheehan and Canadian Garry LeGare.  It was a revolutionary design and very efficient, although the very wide landing gear track did cause some problems and had to be very accurately set up.  A later version, the Tri-Q featured a conventional tricycle landing gear.

The Q2 featured a pre-fabricated fuselage that came in in 4 sections as it was reckoned that this would give better control of the finished product.  The tail section can be disconnected for transporting.  The prototype Q2 was built by Garry LeGare at his facility at Langley, British Columbia, and was powered by a Revmaster 2100cc motor producing 64 HP.  Like the VariEze, the Quickie aircraft cannot stall because the canard stalls before the main wing which produces a drop of the nose and a return to full lift.

The later Q 200 featured an O-200 motor of 100 HP and a stronger canard with a new airfoil that was not so susceptible to rain and bugs. 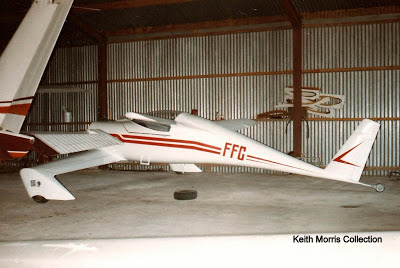 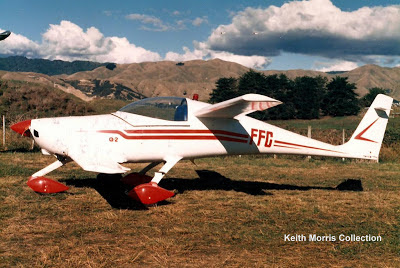 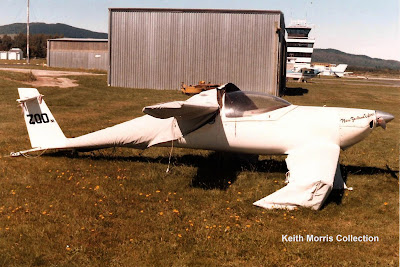 The next Q2 to come along hot on the heels of ZK-FFC was Gary Forlong's ZK-ZOO(m) (c/n AACA/269), which he built at Rotorua.  It was first registered on 13/7/84 and was named "New Zealand Explorer".  Gary Forlong also built VariEze ZK-ZAP.  It is photo'd above early on in its life, at Rotorua.  It was sold to JH Dunn of Pukerua Bay on 8/4/88. 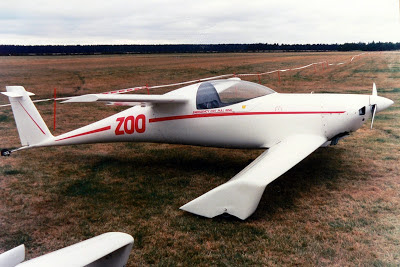 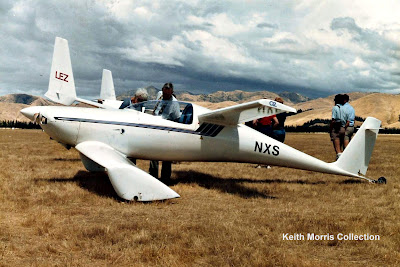 Next was ZK-NXS (c/n AACA/675) which was built by Murray McLennan of Auckland, and was first registered on 6/8/84.  It is photo'd above at the 1987 AACA flyin at Omaka.  It was sold to G Thompson, GJ Ross and G Dawson of Auckland on 24/4/91.  It also migrated South with the NXS Syndicate of Christchurch from 22/10/92.  It suffered an unusual accident when it was dropped from a hangar ceiling at West Melton.  However it is still current. 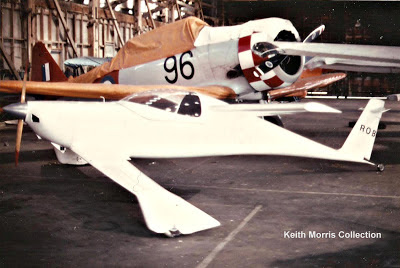 And our final Q2 (for this bunch) was ZK-ROB (c/n AACA/714) which was built by Robert Power of Whakatane, and was first registered on 21/2/85.  It is photo'd above early on in its life in the old hangar at Tauranga. 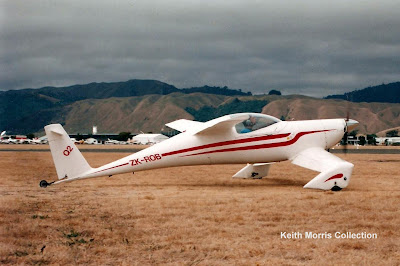 It was sold to G Whitsitt and GJ Ross of Kaiapoi on 22/7/91 and it was damaged in a ground loop at Christchurch on 25/11/91.  it was rebuilt however as can be seen in the above photo taken at the 1994 AACA flyin at Paraparaumu.  Tragically it was lost in a fatal crash due to an engine fire at Duvauchelle Peak on Banks Peninsula on 13/10/97.  It was cancelled on 6/4/98. 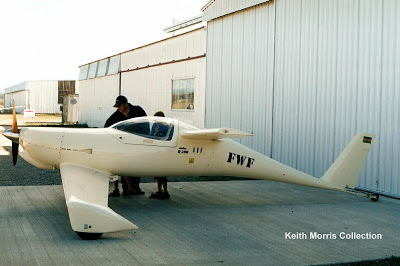 That ends the list of the registered Q2s and the Q200s of New Zealand.  Some other projects have been worked on, most notably the Q2 of John Dunn of Pukerua Bay, near Wellington, but I understand that he has retired from the project.

But wait!  There is more!, which I will detail in another post.