The remainder of the first batch of Aerocraft kits.

The reason that the early homebuilders built Turbulents was that at that time the Department of Civil Aviation had to approve aircraft plans before an aircraft was built, and I think that the Turbulent plans were the first to be approved. This was in part because the Turbulent wing had 2 spars and the DCA was not comfortable with a single wing spar such as in the Jodel aircraft. Later this changed but the first Jodel D9 (which was an earlier design) was not registered until March 1967.

Again the photos are nearly all from the Keith Morris collection and I have taken most of them. However some of the photos were taken by others and I do not have a record of who took them. The early photos of Turbulents at Wanganui were taken by Ray Deerness in the early 1960's. The last of these is ZK-CAG below. 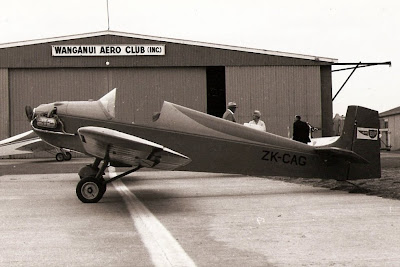 ZK-CAG (c/n 1005) was first registered to L H Mungavin of Palmerston North on 4/5/61 and I guess it may have been built by Aerocraft. 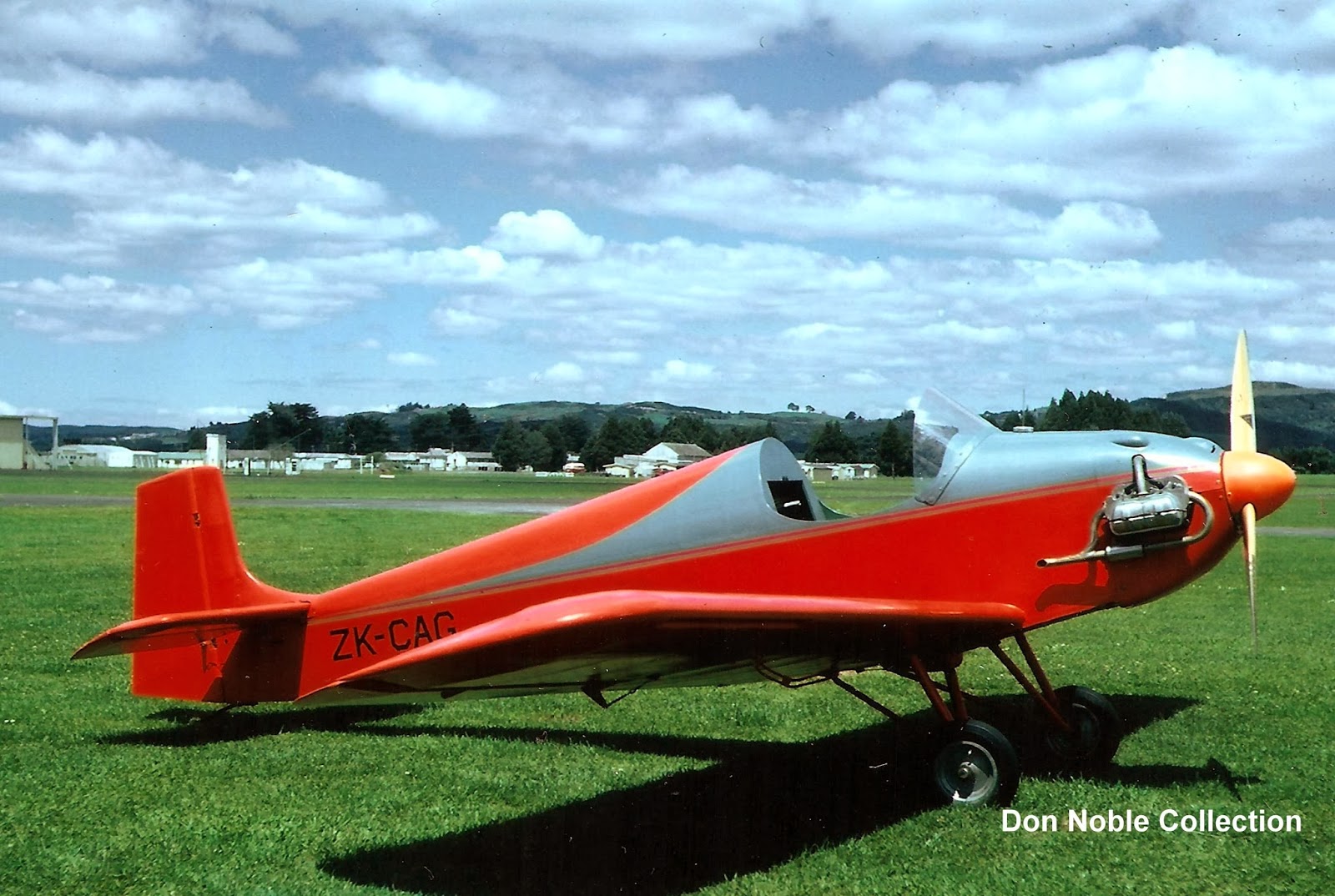 Ownership transferred to R A Hicks of Auckland and it is photo'd above at Ardmore on 5/12/65.  It crashed on 22/7/66 at Horsham Downs, and was cancelled on 28/3/68 making it our shortest lived Turbulent. 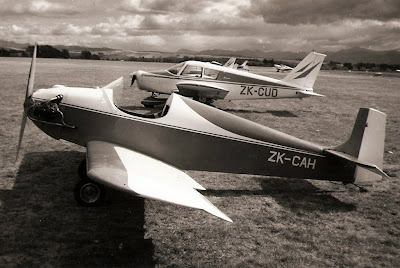 ZK-CAH (c/n 1004) was first registered to A Myers of Palmerston North on 4/5/61 and then transferred to Aviation Sales and Service Ltd and then Aerocraft (NZ) Ltd, all of Palmerston North, so I guess it may also have been built by Aerocraft. It was then hired to the South Canterbury Aero Club and was owned by a P Slater.  It is photographed above at the same Blenheim airshow that ZK-CAC was travelling to (see last post). 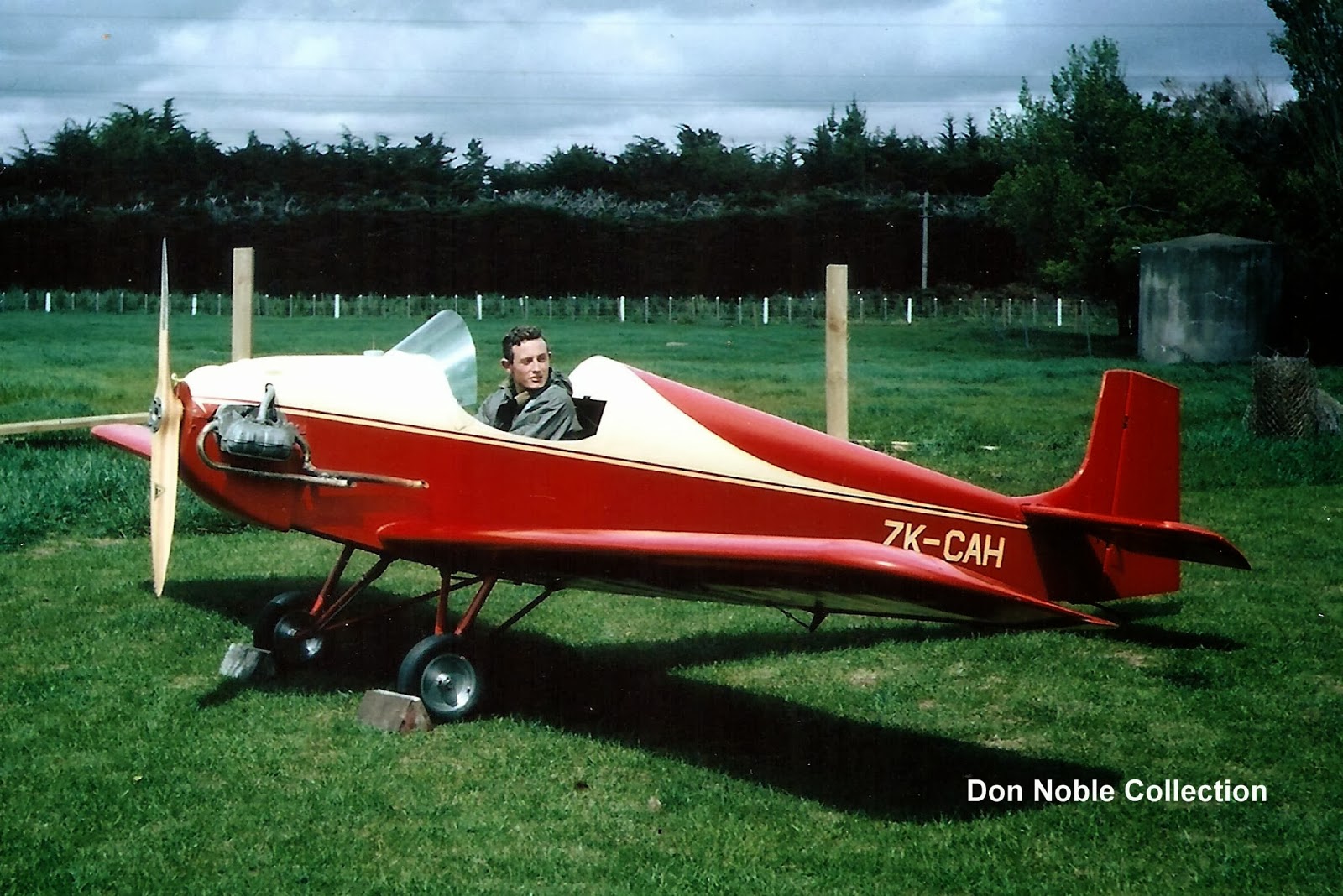 ZK-CAH is photo'd above by Don Noble at Palmerston North on 24/10/65.  I think this photo would have been taken at Kairanga, where Aerocraft built their Turbulents. 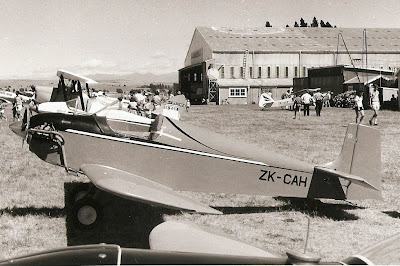 However ZK-CAH was re-registered on 25/2/72 after having been rebuilt by Robbie Gentry (who also built ZK-CAE), with a new c/n of AACA /10-R. It is again photographed at Blenhiem, this time at the AACA flyin of 1973 when I remember that the colour scheme was iridescent green, as in the colour photo below, which was taken at Masterton on 4/1/75. 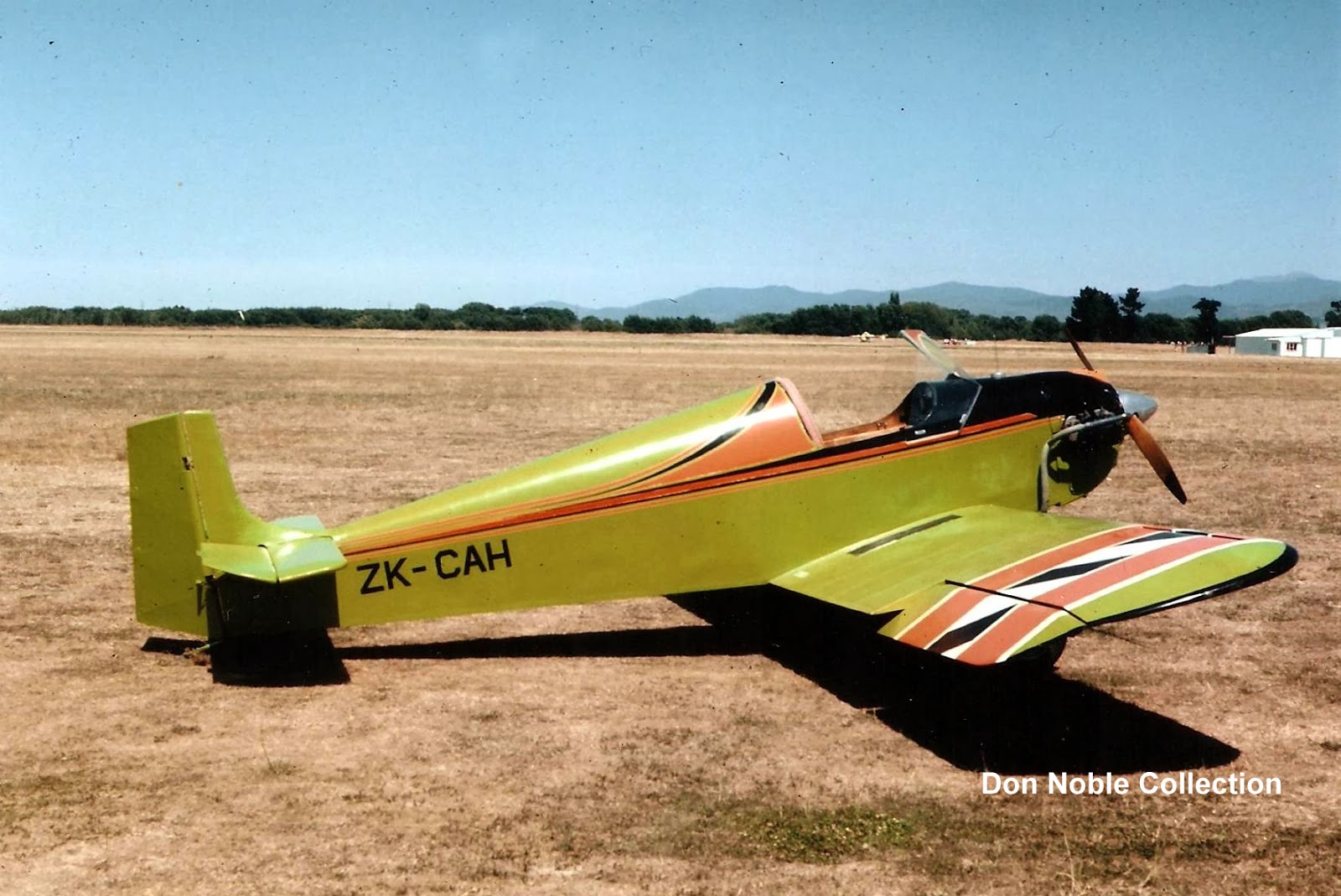 Robbie sold it to Bernie Webb of Wellington on 1/12/72 who in turn sold it to Cliff Adams of Masterton. 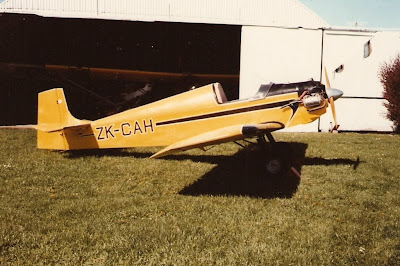 It is photographed here at Masterton during the time that Cliff Adams owned it. It overturned during a forced landing at Putara Valley (in the Wairarapa I think), on 17/4/82, and it was never rebuilt. It was cancelled on 2/2/94. 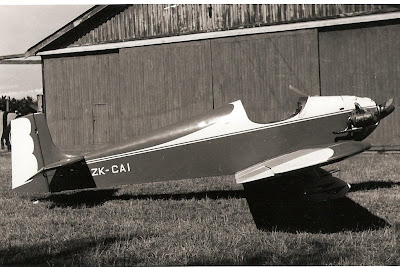 ZK-CAI (c/n 1006) was first registered to Neil Cribb of Palmerston North on 4/5/71 so I guess it also may have been built by Aerocraft (all of what I assume are the Aerocraft built Turbulents have the same color scheme pattern but with different colours). It was on line with the Palmerston North Flying School before being sold to F P Bracefield of Christchurch, G A Vodane of Hamilton on 26/9/69 and then to the Egmont Chapter of the AACA on 18/2/70.   It is photo'd below by Don Noble at Omaka in 5/1/69, (obviously at the same time and place as the above black and white photo). 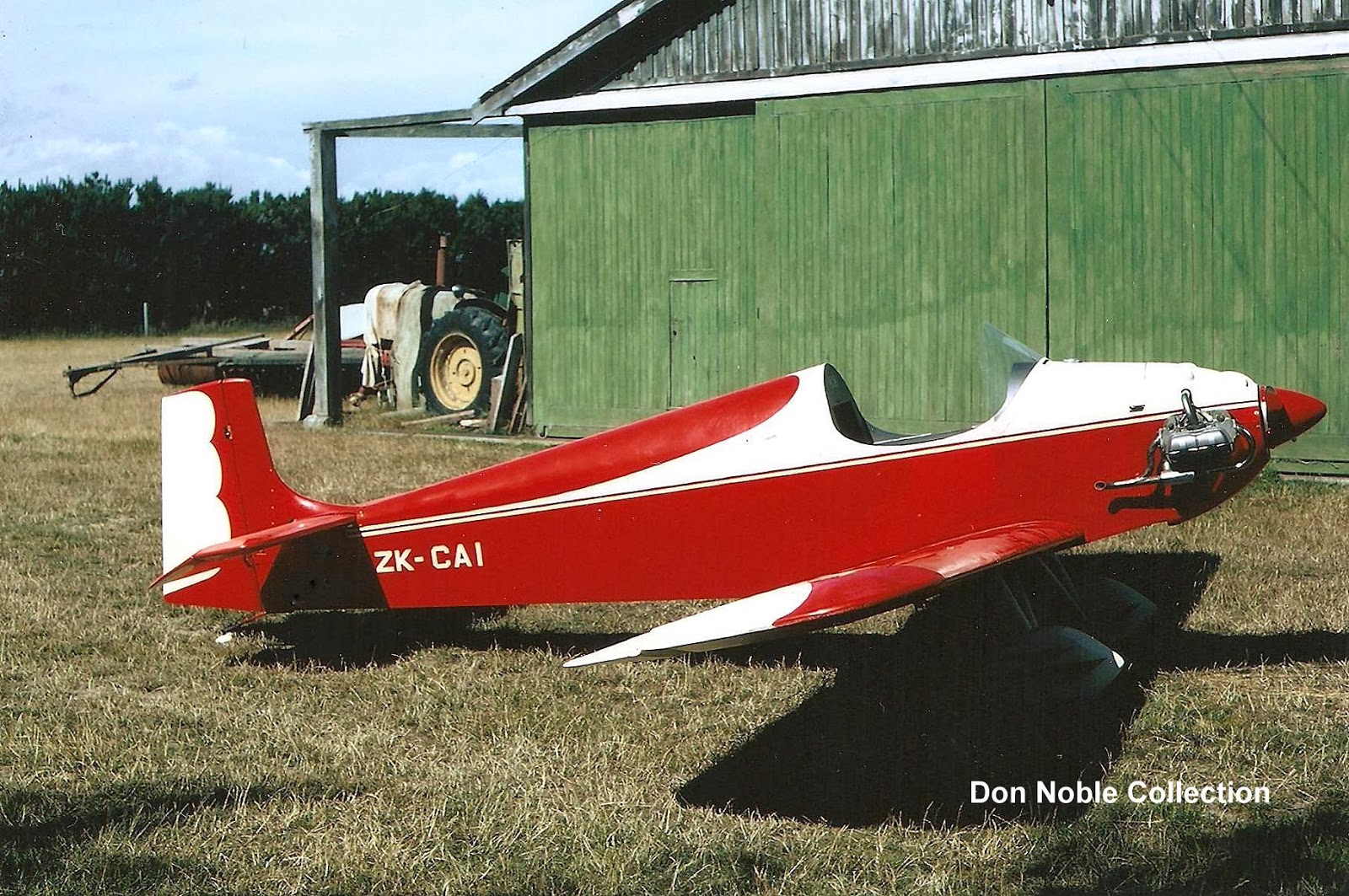 And the final Turbulent in the series of 8 registrations, ZK-CAJ (c/n 1007) was registered to H W Jensen of Palmerston North but was not completed. It was cancelled on 11/8/77.