I remember when Grumman G44 Widgeons operated out of Invercargill. I also recall the first occasion that I heard the radio call of "Alpha Victor Mike, wheels up and landing". It took a few minutes for the penny to drop that it was the amphibian landing on Halfmoon Bay at Stewart Island. From memory I think AVM had at least four landing incidents with the wheels either down when they should not have been, and up when they should not have been, with very spectacular results.

Here I have two shots of ZK-AVM , c/n 1466 , taken at Invercargill, with two different operators. Top view taken on 26-07-1969 with NZ Tourist Air Travel and bottom view with Mount Cook Airlines on 25-04-1974.
This aircraft has had a very interesting life and I believe it is still stored in the Auckland area with Owen Harnish. 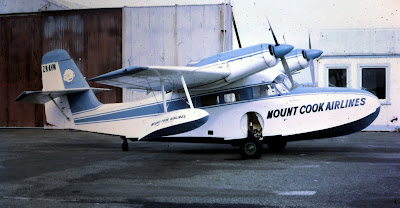 This Invercargill third level airline (and numerous others) is being covered on a blog dedicated to third level operators. Well worth a look. Go to http://3rdlevelnz.blogspot.com/
Posted by Dave Paull at 11:54