Talking about the PIG

Talking about "PIG" reminds me 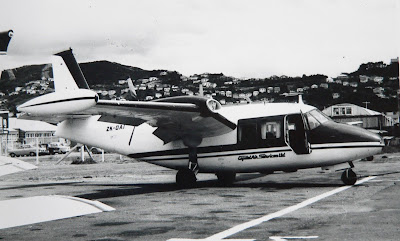 of another aircraft which was referred to as "The Pig". This was not in a derogatory way but came from a shortened version of its manufactures name.

ZK-DAI , c/n 410 , was the prototype Piaggio P166B which was delivered to Australia as VH-PQA in January of 1964. It did a stint in PNG before returning to Australia and then to NZ; arriving here on 27-02-1970 to be registered as ZK-DAI on 05-03-1970 to the Wellington Aero Club. It was then re-listed to the Clubs commercial arm Capital Air Services on 08-06-70. It was slightly different than the norm for this period in having two pusher, geared, fuel injected, super charged Lycoming engines (IGSO-540 if memory serves me). An interesting piece of kit, with a very distinctive sound.