Norfolk Road airstrip is also the base for Flight Fix NZ Ltd and Gareth Semenoff kindly showed me around and told showed me some of their projects.  They specialise in Cessna refurbishments and some of the planes they have recently completed are a C 180 and C 172 ex Japan for Rob Fry, and   most recent project is a C 206 amphibian that is for an Australian owner.  They also have a C 172 ex Arizona and a C 206 ex Australia currently under refurbishment. 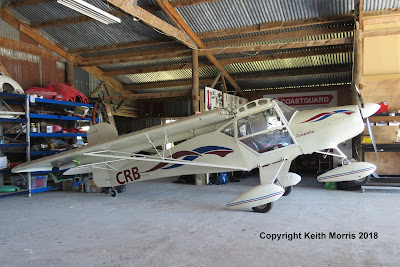 However, for me, a more interesting aircraft in their hangar was the Skycraft CA25N Gazelle ZK-CRB2 that has been imported by Randy Beier of Hawera.  This was first registered in Australia as VH-BGP3 on 14/5/97 and later was transferred to the Australian Recreational register as 24-8643.  It was owned by Randy Beier in Australia and was advertised for sale, but Randy has now bought the aircraft to New Zealand.  This is our second Skycraft Gazelle and it has not flown here yet.