Aeropro Eurofox G-GBNZ has left Lord Howe Island  today 5 December 2018 on its final leg to New Zealand.  This is the culmination of a 17,000 mile expedition to commemorate the centenary of the formation of the RAF. 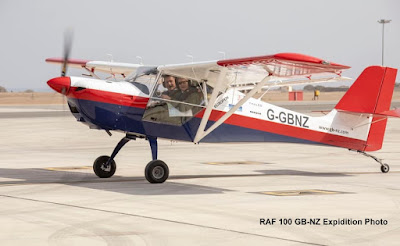 The Eurofox aircraft is a development of the original Kitfox.  G-GBNZ is modified including a 146 litre fuel capacity that gives a 15 hour range and IFR instrumentation.  It is painted in a high-viz patriotic red, white and blue colour scheme similar to the Royal Aircraft Establishment but without RAF markings.  It is planned that the aircraft will visit Kaipara Flats and Ardmore over the weekend to join in to local events.

The expedition has a website www.gb-nz.com from which the information below is sourced:


Overview - 2018 is the 100th anniversary of the formation of the RAF from the Royal Flying Corps and the Royal Naval Air Service, to create the first independent air force in the world. At its peak, the RAF was truly a global force, resulting in a rich historical legacy over a wide geographical area. The RAF 100 Great Britain to New Zealand expedition aims to visit a large number of significant former RAF locations on a 17 000 mile route following the path paved by the aeronautical trail blazers of the 1920s and 30s.

Engagement – The RAF 100 mantra is commemorate, celebrate, inspire. The expedition will strive to inspire young people to pursue STEM subjects (Science, Technology, Engineering and Mathematics) through engagement with schools and youth organisations en route in addition to the UK and New Zealand. We’ve already presented a lecture about science, engineering and aviation to 250 pupils at Kinross High School and presented to 10 Air Training Corps squadrons; much more to follow. We will also be commemorating our forebears at significant points en route; two of the less frequently visited locations will be the final resting places of HMS Prince of Wales and HMS Repulse off Malaysia and the attack on Broome, Australia in 1942.

We are also formally engaging with the air forces of, Thailand, Malaysia, Singapore, Australia and New Zealand, remembering our combined past and fostering a shared future.

Funding – The trip is being funded primarily by personal contributions. The total cost will be in the region of £20k with an aspiration to meet some of the fixed costs (insurance and crating) through sponsorship from Thales, MBDA and Air Courtage Assurances.