I have received a request from a blog follower seeking more information about this photograph of the Douglas DC3 ZK-BQK.

"Sir...maybe you can help with a bit of a mystery.
Daks with a fluro tail at Christchurch in 1959 .
My kid  memory [I was14] says NAC had 5 of these Daks running under the title of Freightair.
However I noticed recently the pic  [my dad took and I was there ] had a passenger exiting" . 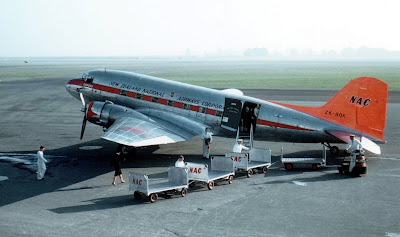 There is a photograph of this same aircraft taken from the other side in the "NAC - Illustrated History of New Zealand National Airways Corporation 1947-1978" book by Richard Waugh, Peter Layne and Graeme McConnell.

Anybody care to comment ?
I note there is an unusual graphic below the cockpit.

Peter Layne - co-author of the above mentioned book has responded

There are two topics in his request.
There were actually six, not five “long term” Freightairs being ZK-AOI, ZK-AQP, ZK-AQS, ZK-AWO, ZK-AZM & ZK-BKE. Of these, ZK-AQP and ZK-BKE were the only ones to spend their entire NAC careers as Freightairs – the other four were converted from passenger aircraft as required. ZK-AOI 1948, ZK-AWO 1958, ZK-AQS and ZK-AZM both 1961. ZK-AWO was after the first Viscount arrived and ZK-AQS and ZK-AZM after the first Friendships arrived.
Additionally, ZK-AQS was an occasional “light freighter” in the mid 1950s. Basically it flew on occasion with seats removed to accommodate light weight freight. Going back to the early NAC days, ZK-AOD, ZK-AOE and ZK-AOF were contracted to do the Cook Strait freight service. ZK-AOE crashed in 1948 but ZK-AOD and ZK-AOF carried on as Freightairs until 1950.
There were originally going to be four early Freightairs with the inclusion of ZK-AOG but that aircraft was deemed as surplus and retained its RNZAF serial NZ3538. A reassessment saw NZ3538 called upon once more but with strict rules at the time so NZ3538 could not have its civil registration reinstated so it became ZK-AQP.
There were actually two day glo DC-3s. The other was none other than that fine old workhorse ZK-AWP, which was the first to obtain its own scheme, in 1960. Only the top of the tail (above the cheet line bearing the registration letters and each complete wing tip. ZK-BQK followed, also in 1960, with the entire tail done but not the wingtips.
The art work on the nose is simply the standard Douglas logo normally carried on the tail but with the tail adorned in day glo it had to be moved. Strangely though, when the DC-3's were repainted in a “Viscount scheme” the Douglas logo no longer featured.
The idea was an experiment to see if the DC-3's could be seen better by crews of faster flying Viscounts and Friendships but it soon proved totally ineffective and was abandoned soon after. In keeping with idea of visibility “collision avoidance” the DC-3's all acquired a rotating tail mounted red beacon. The first one I saw was I think in 1961 atop ZK-AZA.

A REQUEST from Peter
Is there someone out there with a photo of ZK-AWP in its day glo scheme.
I would dearly like to see it in print.