I will include the Dyn Aero MCR 4S here because it is a direct development of the MCR 01.  It first flew in 2000 and is available as a kit for homebuilding.  It features the same double slotted wing that gives a wide range of performance, and the fuselage is lengthened to allow for 4 seats. 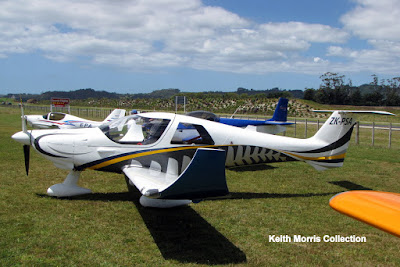 Our only MCR 4S to date is ZK-PSA which was built by Peter Armstrong from an advanced kit that he initially built over several trips to the Dyn Aero factory in France, The aircraft was shipped to New Zealand arriving in July 2008 and was registered to Pestar Holdings Ltd of Auckland on 17/6/11.  It is powered by a Rotax 914 engine of 120 HP and has a very advanced avionics fit out with all glass screens.  It is photo'd above at the Whitianga fly out from the 2012 SAANZ flyin, where it can be seen that it has a very distinctive New Zealand inspired colour scheme. 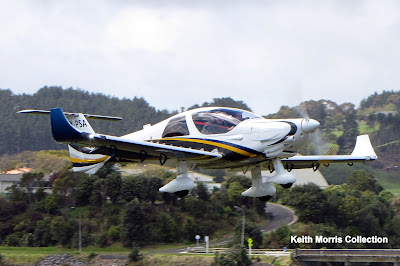 In this view, taken while landing at the 2013 Black Sands flyin at Raglan, the large double slotted flaps can be seen (click the photo to enlarge once or twice).  A very nice and technically advanced aeroplane.