My memories of early exposure to aircraft were further jogged by the recent post on Bristol Freighters.  So I thought that an evocative early colour photo of a New Zealand National Airways Corporation DC 3 from the Neville Drake collection was worth posting, if even for the neat old Vacuum Oil fuel truck in the foreground.  The photo was taken at Paraparaumu and is undated, but must have been in the early 1950s. 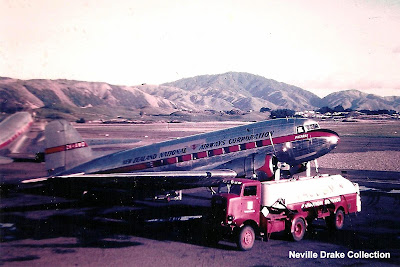 ZK-AWQ was withdrawn from NAC service on 18/4/61 and returned to the RNZAF where it was re-allocated the serial NZ3546 and was fitted for target towing.  It served with the RNZAF until late 1977 when it was demobbed again,  It was then sold by tender to K B Neely of Christchurch and was again registered as ZK-AWQ on 6/12/78 for ferrying to Christchurch where the photos below were taken. 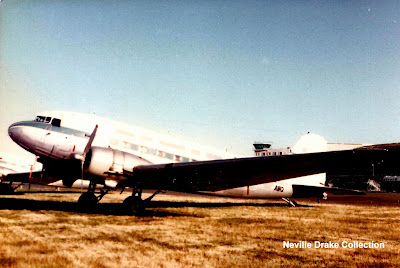 In its ferry scheme with RNZAF marking painted over. 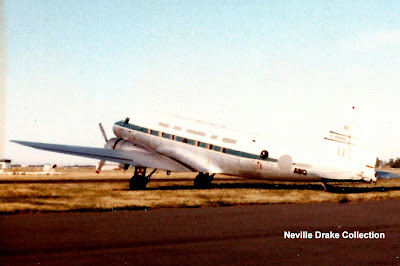 The aircraft was then caught up in international politics, as the New Zealand Government suspected that the aircraft was going to be sold to Rhodesia which at that time was under strict international trade sanctions, and refused it an export permit.  So it sat at Harewood along with 3 other DC 3s purchased by Mr Neely. 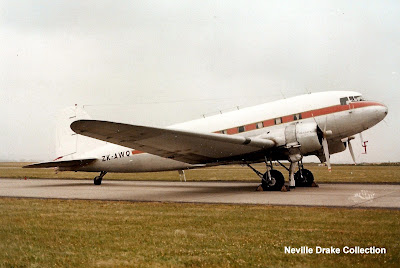 It was repainted as shown in the above photo and eventually flew out from New Zealand on 8/12/80 for Singapore after the sanctions were lifted.  It became D6-CAG with Islands Associates of London on 1/1/81 and was leased to Air Comores of Moroni which is the capital city of the Union of Comores, a 30 square kilometre archipelago in the Indian Ocean.  By 1982 it had made its way to South Africa where it became 6863 with the SAAF.  At a later date it was converted to PT 6 turboprop power as a C-47-TP.  Finally it was de-mobbed (for the third time!) and sold to Dobson Aviation of Ottawa, Kansas and allocated the US registration N81907 on 14/7/98 but this was not taken up.  It was registered as to Dobson International Parts SA as ZS-OJL on 15/2/01 and ferried to Wonderboom Airport, North of Pretoria where it was placed in storage.  But she still lived on! as can be seen in the 2010 photo at http://www.flickr.com/photos/hetebrij/5156368584/ where she looks great.

That is one interesting aircraft history!  Thanks very much to Flyernzl for the above information.

Flyernzl has posted another excellent and comprehensive history of all of New Zealand's 42 civil DC 3s at http://rnzaf.proboards.com/thread/17606/photo-thread-douglas-dc-3

And a final footnote.