SportCruiser ZK-SXY was displayed by Aerosport Aviation at Ashburton, painted up with various notes and wearing SportCruiser SC-3-D titles.  This is in fact the third iteration of this particular aircraft (c/n 09SC265) which started off as a Czech Aero Works (CZAW) SportCruiser when it was first registered on 23/12/09.  Then in 2010 it morphed into a Piper Sport - see my earlier post at www.nzcivair.blogspot.co.nz/2010/02/czech-aero-work-sportcruiser-is-now.html 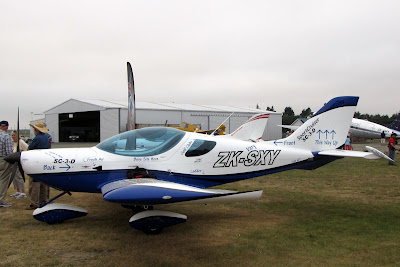 Now for its third identity it is badged as a SportcCuiser SC-3-D, which is the latest version of the design by Chip Irwin and Danny Defelici who were the original designers and owners of Czech Aero Works.  After Piper baled out of the Piper Sport in 2011, Irwin and Defelici set up a new manufacturing faciity in Zuhai, China, to manufacture the SportCruiser SC3D.  The SC-3-D will have several improvements including a more streamlined canopy and a steerable nosewheel, and will have a Rotax 912S engine as standard.  I understand that Aerosport Aviation will receive a real SC-3-D soon.

Confusingly, the SportCruiser is still manufactured in Czechoslovakia by Czech Sport Aircraft.

And in a more local confusing note, this ZK-SXY is in fact the second SportCruiser to be registered ZK-SXY with the first one (c/n 09SC246) being re-registered as ZK-MBD in December 2009.