Our next type of 2 seater homebuilt aircraft to come along was the Piel Emeraude.

The original Piel CP 30 Emeraude (Emerald in French), was designed by Claude Piel in France in the early 1950's and the prototype first flew on 19/6/54.  It was licensed to be produced by various companies in France (where several hundred were built), in the UK (where a small number were built as the Fairtravel Linnet), and in South Africa (where it was called the Durban Aeriel).  It was also available for homebuilding.  Claude Piel updated the Emeraude  to the Super Emeraude in the early 1960's and this design eventually served as the basis for the CAP 10 aerobatic aircraft.  The Emeraude was classy and complicated, with an elliptical wing. 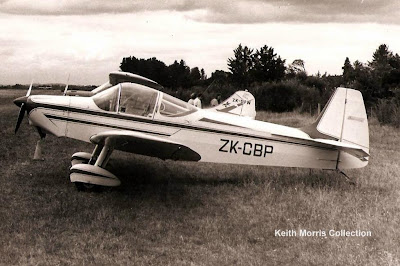 Our first Emeraude was ZK-CBP (c/n CP-1044), which was registered very early on (registrations were allocated in alphabetical order back then), being registered to the Ultraflight Aircraft Group of Southland Aero Club on 10/4/62.  However it did not fly until 21/11/70, (well after Minicab ZK-CLS in October 1966 and Jodel D 11 ZK-CKG in February 1968).  Its first flight resulted it being damaged, but it was repaired and it flew again on 3/4/71.  The above photo was taken at the 1974 AACA flyin at Bridge Pa, Hastings.  It passed through a series of owners around Invercargill - AT Wills and BW Pay on 14/10/75, in whose ownership is was photo'd below at West Melton by Don Noble, on 30/10/75. 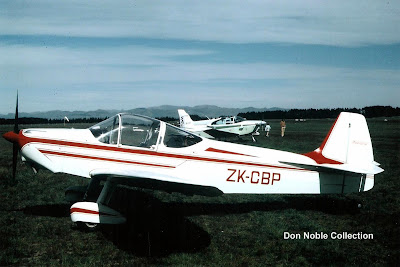 Ownership changed to the Ultralight Aircraft Group of Invercargill on 16/6/76.  It overturned at Scotts Gap, West of Winton on 28/8/76.  It was rebuilt and ownership changed to SP Reid of Blenhiem on 10/9/82, then to well-known aircraft builder AD (Jack) Melhopt of Timaru on 15/8/85. 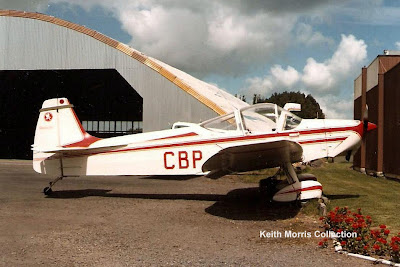 The above photo was taken at Ardmore in 1985.  Finally it moved to the North Island, to The Cambridge Flying Machine Co Ltd of Cambridge on 28/4/12, with whom it is still current. 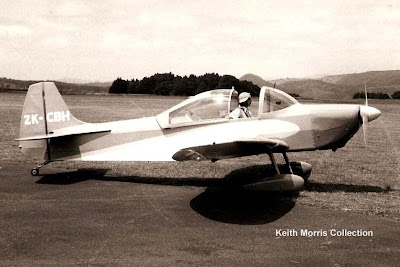 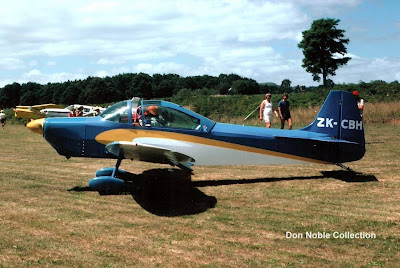 It was sold to Cliff Marchant of Wellington on13/12/76.  It struck a horse at Terewhiti Station near Wellington on 7/2/77 and ownership changed to DJ Stuart of Lower Hutt on 16/11/78.  It was still damaged at this time, but Dave Stewart repaired it and flew in in the blue and white colour scheme.. 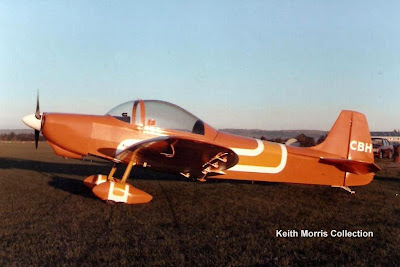 Finally ownership changed to John Shakes of Carterton on 9/5/83.  I understood that he rebuilt the aircraft and repainted it in this striking orange colour scheme, as photo'd at Feilding in 1983.  It was withdrawn and cancelled on 9/7/01. 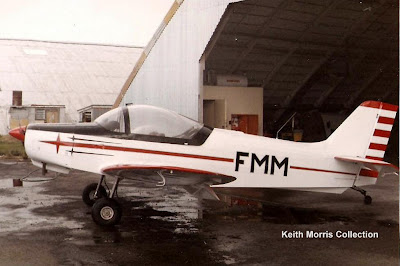 Our third Emeraude was Super Emeraude CP 328 ZK-FMM (c/n AACA/446) which was started by C Campbell of Auckland.  However it was completed by John Danaher and the Auckland Aero Club, and was first registered to them on 12/5/86, and ownership the transferred to the Auckland Aero Club on 10/11/87.  The above photo was taken at Ardmore early on in its life, in 1986. 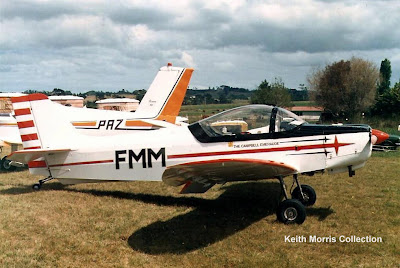 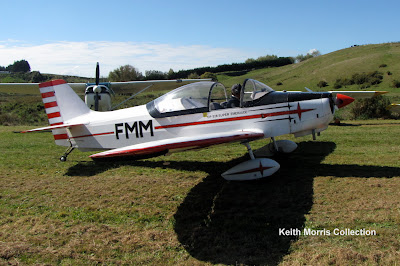 It is still current with Bruce McDonald and it is photo'd here at the Auckland Chapter SAANZ flyin at kelly Field on 21/4/12.  It now has the script CP 328 Super Emeraude under the cockpit.  You can see the elliptical wing shape in the sadow of the wing in this photo.

Several other Emeraude's were begun in New Zealand and some had registrations reserved:  ZK-DET, ZK-DYE and ZK-SLG.  However none were completed and we are unlikely to see any more Emeraudes in New Zealand unless someone imports one.