Two Eurocopter AS 355 F2 Twin Star Ecureuil 2’s were removed from their shipping container at Pacific Aircraft Services of Christchurch on 08-11-2012. Both are ex the Czech Republic and from the same operator.
The older of the two was built in 1988 for delivery to the Guardia Nacional de Venezuela (Police) and allocated the GN-8884 markings. It was damaged on 12-05-1994 and was returned to Eurocopter for repairs. It re-surfaced allocated the French test registration of F-WQED before delivery in an all yellow scheme to become OK-BIC in 1996 with Autoklub Bohemia Assistance – Better known as ABA Air.

Below is a photograph of OK-BIC in November 1996 with the French test registration of F-WQED attached temporarily inside the cockpit window. Photo from Marcel Herzig.
(Marcus runs a site dedicated to the Pilatus Porter at http://www.pc-6.com/ )

It later moved to Delta Systems Air (DSA) in the EMS role.
Photo below by Jiri Sofikanic at www.czechairspotters.com

Below are the two airframes mentioned above, as seen at Pacific Aircraft at Christchurch on 09-11-2012. OK-BIC nearest, with OK-AIA behind. OK-AIA was allocated ZK-HLI6 briefly before settling on ZK-HUQ3. 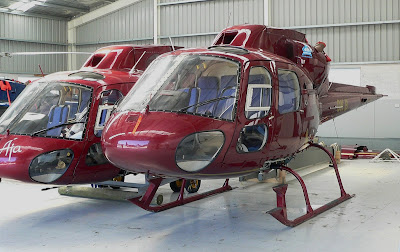 OK-BIC become ZK-HFS4 and was listed to Rotor Flite NZ Ltd in late November. Certification work on this one is under way at press time.

Below, work underway on its NZ certification at Pacific Aircraft Services at Christchurch. Pic taken 28-11-12. 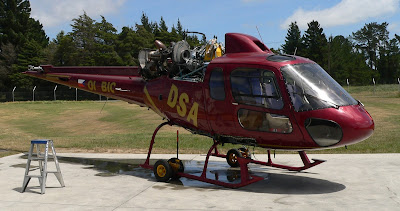 Below is a photograph from Tony McFarlin showing ZK-HFS4 on 29-01-2013 at Christchurch.