This is a re-run of the original posting - correcting some errors and adding additional info and pics. Thanks to all who contributed.
Cessna 185C Skywagon ZK-CGG (c/n 185C-0769) was built as N5869Z and crated to New Plymouth for Rex Aviation (NZ) Ltd where it was assembled in September of 1964.
As a bit of usless information - in these earlier Cessna days - the last two numbers of the c/n where almost always the same as the last two numbers of the US civil registration.
Like most of these new 185's it was fitted with a "can" and sent out to earn its living on the farm.
It was delivered to Rural Aviation (1963) Ltd on 21-09-1964.
Below is an early photograph of ZK-CGG which had been allocated to Peter Meek and based at Taumaranui. Pic taken in the mid 60's by Allan Wooller. It has a Sea horse on the engine cowling, "Peter Meek" on the forward fuselage, and the round Cessna logo on its fin. The "Sea Horse" coming from its registration Cee Gee Gee. 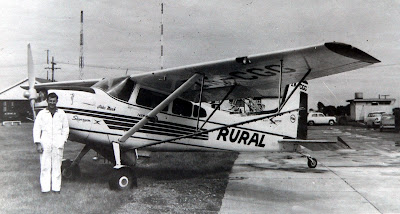 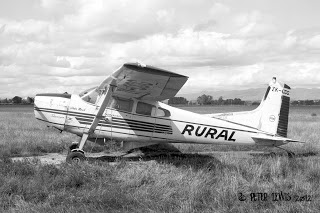 These two views (above and below) come from Flyernz and were taken at Fielding on 05-02-1967.
It still wears the seahorse on the engine cowling and has "Taumaranui" on the doors. 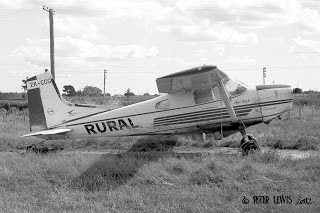 Below is a shot of ZK-CGG taken at Tekuiti, about the same period, supplied by Ron Ark via Tomarse. 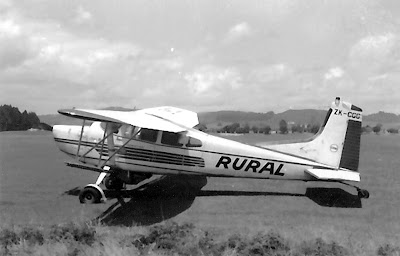 It was replaced at Te Kuiti by an AgWagon, and it was parked up at New Plymouth. In December of 1967 the hopper was out and it was used for parachuting out of Ardmore. In early 1967 the hopper went back in for John Harding to use on spraying duties.
Pictured below in a new paint scheme at Wanganui in February 1969. Another pic by Allan Wooller. 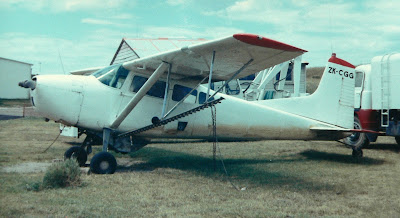 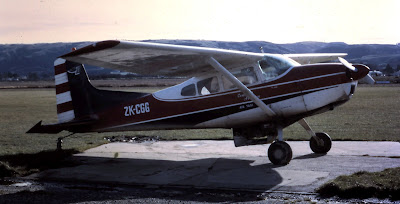 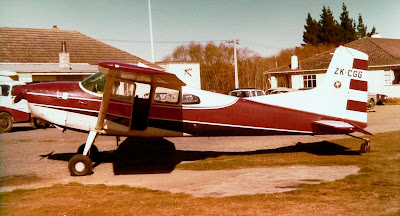 During 1982 it was noted at Southair having corroded tail section rebuilt.
In 1988 it was used on parachute dropping for the Otago Parachute Club and then migrated to the North Island.
It had an engine failure and landed at the Taihape strip, in I think March 1991, followed by registration cancellation on 10-05-1991 and it went into storage as the owner was overseas, it just stayed in the Rangitikei hangar.
I next spied it stripped at Fielding in April of 2003. Aero Support at Fielding restored it to the register on 23-03-2004 for David Sarginson. 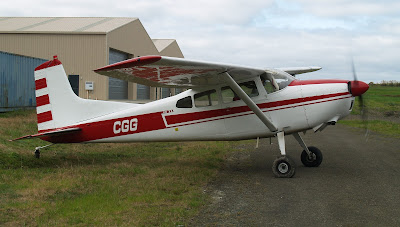 Final pic, above, was taken at North Shore on 14-06-2011 by Greybeard.
Now - a note from the current owner of ZK-CGG:-
Great to see some early photos of CGG, compared to a lot of early 180/185s she seems to have been quite camera shy. At only 4600hrs total time she is most likely the lowest time old 'ag' 185, still with the Rural mods, including the old intake and exit holes for the super, now covered. She now resides back in Wanaka for private use. Some vid clips of recent flying on '64 skywagon' at youtube for the really keen (link below). Final bit of useless trivia - the only two of the ex Rural 185s still flying with the original IO-470 260hp engine are CGG and CGC. With lower fuel burn its a great engine for longish range flying in private use.