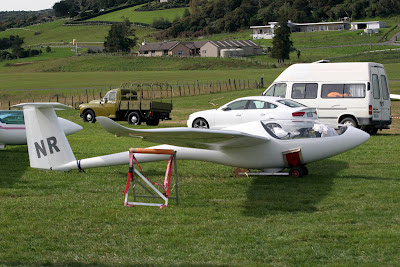 Our only Apis glider to date is Apis 13 ZK-GNR (c/n A032KST06) which was built from a kit by Grahame Player of Auckland, and was first registered on 28/8/07.  Grahame said that the kit took around a year to put together.  He  has now flown ZK-GNR for around 200 hours and says it flies very well.

It is photo'd here at Drury by Andy Heap on 30/4/11, on the occasion of the Auckland Gliding Club's 80th birthday celebrations.  Thanks to Andy Heap for the photo.

This finishes my series on Homebuilt Gliders of New Zealand, unless anyone can advise any I have missed.