This post completes the New Zealand Minicabs to date. There might others out there still under construction, but I would guess that there would not be many. 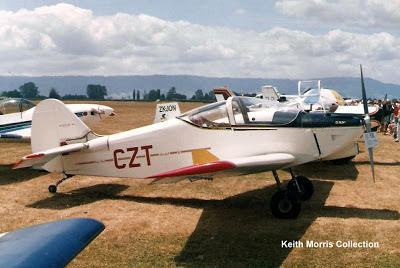 ZK-CZT (GY 201 c/n AACA/81/1) was built by Paul Parsons of Hamilton over many years and was registered to Endersley Aviation C/- PR Parsons on 14/11/89.  It is photo'd here at an airshow at Matamata in 1991, and it can be seen that it has a different canopy to other Minicabs.  I don't think it has flown much.  It sat outside at Hamilton Airport for some time, and when I last saw it, it was hangared at Te Kowhai. 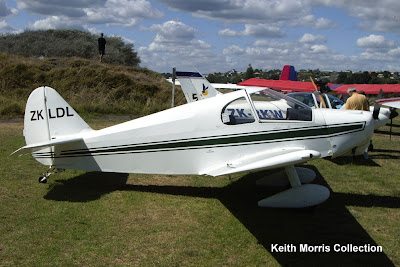 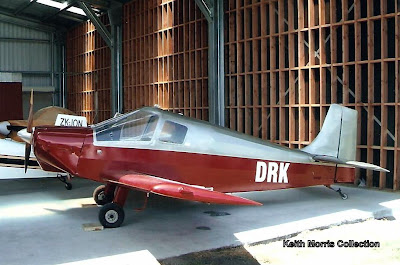 And our final Minicab was GY 20 ZK-DRK (c/n 249) which was built by David R King at Tauranga where it was first registered on 24/10/06.  Dave was helped in the construction by Rob Gentry, and it has Robbie's hallmarks in the fixed fin and rudder (refer to his D 11 ZK-DGA still to be posted).  It is photo'd here at the 2008 SAANZ flyin at Tauranga.  It was cancelled on 14/1/11 and I don't think it has ever flown.  However it has recently had a new lease of life, being purchased by Cliff Bellingham of Pukekohe and being re-registered by him on 24/9/12.  Cliff has also recently purchased Minicab ZK-BUC (see Gardan GY 20/201 Minicabs of New Zealand (1)), so it will be interesting to see developments there.

Of course there have been many other Minicab projects started in New Zealand over the years, and some of these were registered under the registration policy of the time where registrations could be issued early in the life of projects.  These included ZK-CRO (which was to be a Hawk BOM-4 Minicab), ZK-CVO, ZK-CVZ, ZK-CXV, ZKCZD, ZK-CZN, ZK-DKS, ZK-DYD and ZK-EFL which was re-registered and completed as ZK-RJK.
Posted by Sir Minty at 21:27