I was sad to hear of the recent death of Stuart Tantrum at Blenhiem. Stuart was a can-do homebuilder who built some really interesting sport and antique aeroplanes. I first knew Stuart in Levin when he was my stage inspector for my Jodel D9 project, and later he successfully test flew the completed aircraft at Foxpine. He was a great help to me and very generous. I remember him giving many children joyrides from Foxpine in his Tiger Moth ZK-ALX. 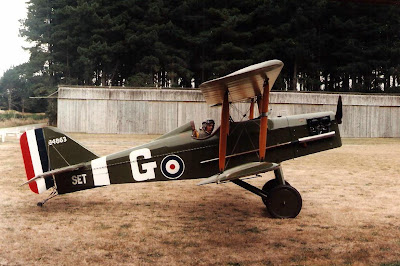 Stuart was AACA member number 266 and he built aircraft quickly. His SE 5A Replica ZK-SET was completed in 1978 (whereas my Jodel which must have been started around the same time, was not completed until 1984). ZK-SET is photo'd here at Foxpine in the 1990's, piloted by Stuart after being rebuilt by him following its accident at the 1992 Auckland air Expo. 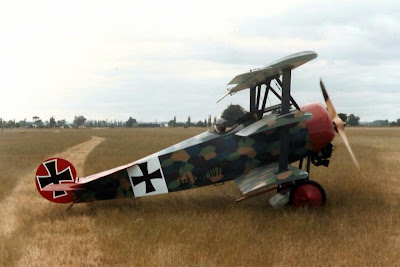 But Stuart really pushed the envelope with his second aircraft, the Fokker Dr1 Triplane Replica ZK-FOK. I was always impressed by Stuart's workmanship as I saw this aircraft coming together in his garage in Levin - so many parts in those 6 wings! ZK-FOK is photo'd here at the 1986 Manawatu Chapter AACA flyin at Feilding in December 1986, in its original lozenge colour scheme. This aircraft can be considered to be the grand-daddy of all the amazing WW 1 aircraft that we now have in New Zealand, including 6 other imported Fokker Triplanes.
Stuart was badly injured in the crash of his Tiger Moth ZK-ALX at Foxpine in January 1986. However he continued with his love of aviation to be back flying again later that year 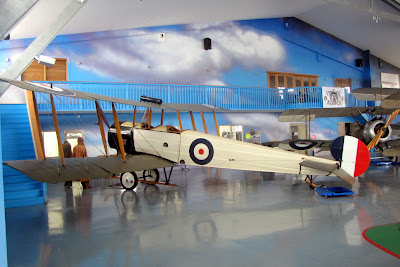 Stuart then shifted to Blenhiem where he formed Antique Aero Engineering Ltd, and he worked there with his son Wayne. Antique Aero Engineering restored several excellent examples of antique aircraft including Rob Mackley's Stearman ZK-BWR and Tiger Moth ZK-BMY.
However, Stuart's foremost legacy to the history of aircraft in New Zealand is the wonderful complete and authentic restoration of Avro 504K ZK-ACU, including an original rotary engine used by the aircraft in the 1930's. This is New Zealand's oldest existing aircraft having been first registered in 1931 and operated by the New Zealand Permanent Air Force. It crashed at new Plymouth in November 1935 and the remains ended up in the Taranaki Museum. The remains were eventually obtained by Stuart and he began restoration in Levin, later shifting the project to Blenhiem. ZK-ACU was restored to the civil aircraft register in October 2008 for The Vintage Aviator, and Stuart carried out the test flying schedule. ZK-ACU is photo'd above in The Vintage Aviator's hangar at Masterton in March 2010. If you look closely you can get an idea of the amazing job that Stuart made of the restoration.
As I said in my introduction, Stuart was a can-do type of guy, and he was a very clever man.
Posted by Sir Minty at 13:59