For all local Jodel fans out there it is a special occurrence when a new type of Jodel is registered in New Zealand. Charlie Kenny of Balclutha has been building his Jodel D 150X for quite a few years, and he registered it on 7 November 2011. The original D 150 Mascaret was designed by Jean Delemontez as a Jodel D 11 replacement, and it first flew in France in 1962. 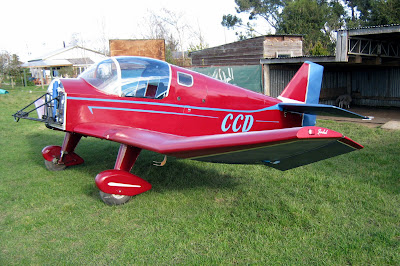 But ZK-CCD is not a standard D 150. Charlie told me that it is a one-off design incorporating the good bits from many Jodel models. It has the luggage locker from a D 140, the tailplane from a D 18, the rudder from the D 150 and the wing airfoil from a D 18, but with a bigger wing, and it has split flaps that drop down from the trailing edge. Charlie has also made the cockpit wider at 44 inches, and he has moved the seat back 3 inches and sloped the seat-back to 30 degrees, giving a very roomy cockpit with great headroom. And it features a FU 24 windscreen. 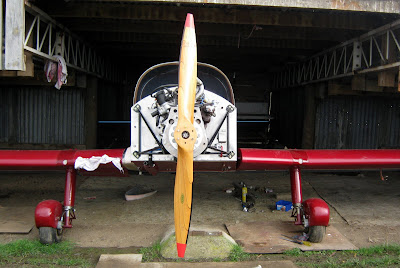 But that is not all that makes ZK-CCD unique, because it has a diesel motor! The motor is a Peugeot 1.9 litre turbo-diesel that produces 97 HP. The radiator is located in the inboard leading edge of one wing, and the battery is in the other wing, and the fuel tank is in the fuselage. Altogether a very interesting sport aircraft.
ZK-CCD is not the first Jodel that Charlie Kenny has built. He previously built Jodel D 9 ZK-AKR, "the Clydevale Phantom".
Thanks to Charlie Kenny for the photos.
Posted by Sir Minty at 20:47