One more Pitts is resident in New Zealand.
This is S-1C N7BH, which lives in the rafters at the Classic Flyers Museum at Tauranga. 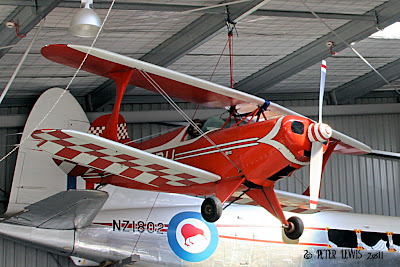 This aircraft seems to have a pretty dodgy history:

"On June 8, 1996, at approximately 1745 Pacific daylight time, a Head Pitts S-1C, N7BH, was substantially damaged when it landed and struck trees approximately 2,000 feet short of runway 34L at Paine Field, Everett, Washington, following a loss of engine power. The aircraft was being operated under 14 CFR 91 on a local personal flight from Paine Field. The private pilot of the amateur-built, single-seat, experimental-category airplane received minor injuries. Visual meteorological conditions prevailed at the time of the accident and no flight plan was filed."

"During an approach to land, the engine lost power on base leg. Subsequently, the pilot landed short of the airport runway, and the aircraft struck trees. The pilot reported that he took off with 22 to 24 gallons of fuel and flew for 30 minutes before the accident at an estimated 5.5 to 6.5 gallon per hour burn rate; a fuel slip indicated the aircraft received 6.3 gallons of fuel before the flight. FAA investigators found 2 to 2 1/2 inches of fuel in the bottom of the main tank forward compartment and no fuel in the main tank rear compartment. Also, they found no mechanical problems with the engine. Fire department personnel switched the aircraft's fuel selector valve from 'MR' (main rear) to 'OFF' at the accident scene. The experimental aircraft was not equipped with fuel gauges. No evidence of a current biennial flight review, aircraft condition inspection, or medical certificate was found."

Presumably the aircraft has received only cosmetic restoration since this incident, as it has never been flown in New Zealand.
Posted by flyernzl at 10:54