Apart from the parachute dropping, weekdays at Parakai airfield (also known as West Auckland Airport) seem pretty quiet and so it was yesterday.  There are quite a lot of hangars however all but 2 of them were shut up.  One of the hangars that was open was that of Leading Edge Aviation Ltd who are the local maintenance facility. 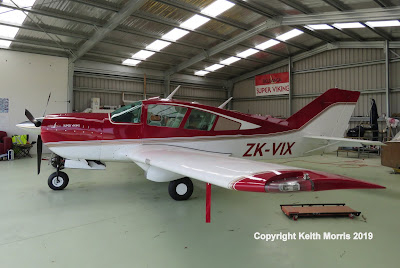 And the other hangar that was open was George Richards' which housed his Falco ZK-SMR and his very nice Bellanca Super Viking 300 ZK-VIX, the first time I had seen it.  This has been mentioned on the blog previously when it was first imported in 2016 at https://nzcivair.blogspot.com/2016/04/bellanca-super-viking-300-zk-vix-first.html