Back in November 2013 I was posting my series of Kitfoxes of New Zealand, and the second post in the series can be found HERE

In that post I mentioned: "The next Kitfox to be registered was ZK-FYM (c/n 1113/AACA/770) which was a Kitfox III with a Rotax 582 engine that was built by Rohan Rudd of Christchurch. It was first registered on 5/8/93 but did not fly for some time after this. Unfortunately it was damaged in a forced landing caused by weather at Kawhia on 17/11/00, and it was cancelled on 14/4/05.
I do not have a photo of ZK-FYM.  Does anyone out there have a photo they can supply?" 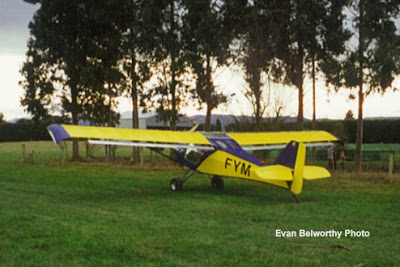 Over the past six years I have been searching for a photo of ZK-FYM and recently Evan Belworthy remembered he had a photo that had been taken at their airstrip around 2000.  Evan has now sent the above photo and I really appreciate receiving it, as it is the only aircraft that I did not have a photo of to post out of the 1,100 or so sport aircraft that I have posted about to date (with around 130 to go).