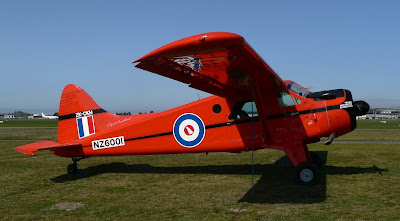 The De Haviland DHC-2 Beaver ZK-CKH (c/n 25) as listed to the Beaver Preservation Trust  cunningly disguised as NZ6001 (but still with the silver fern leaning the wrong way) on the tie downs near the Canterbury Aero Club.
It is on its way down to Mount Cook to meet the Expedition South tractor team which is near completing the 2012km journey from from Piha Beach to Mt Cook. This is a fund raising trip with hopes of gathering 1Million dollars towards the restoration of Sir Ed Hillary's original Scott Base hut.(Don't tell everybody - but I have had the honour of sleeping in that hut).
See earlier story on ZK-CKH at :- ZK-CKH story.

Kaikoura Helicopters Ltd's Robinson R44 Clipper II ZK-HLE2 (c/n 10466) receives some attention from the Heli Maintenance team.
This Robbie was originally listed as ZK-HLE2 in September of 2004 followed by a period as ZK-IDW from June 2013 until returning to ZK-HLE in March this year.
See earlier post at :- ZK-HLE at Kaikoura.
Posted by Blue Bus at 19:47