MRC was on the ball at Ardmore late this morning when he heard the distinctive sound of the Super Trojan overhead.  Living that close to Ardmore has its advantages as he was able to shoot out to catch it landing. 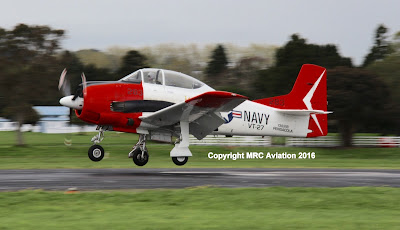 However, on a subsequent flight the undercarriage could not be extended and after circling to burn off excess fuel it made a wheels up landing on Ardmore's cross runway around 2.45.  The pilot was unhurt but the aircraft has obviously suffered damage.
Posted by Sir Minty at 15:04