Here we have three great photos from Andrew Phillpotts collection - thought to be taken by his father at Hood Airfield on 24-05-1957.
The photograph below was taken out in front of the Airlift hangar looking Northeast across the tailplane of De Havilland DH82A Tiger Moth ZK-BFC.
This was c/n 82301 and was registered to Airlift (NZ) Ltd on 04-07-1954 after import from the UK. It was broken up at Masterton in January 1959. 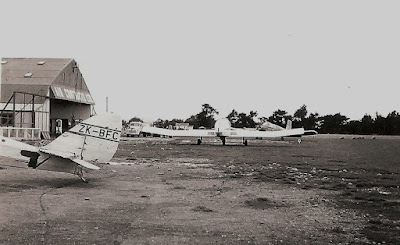 The photo below (a photostitch from two small black and white prints) is looking back towards the Air Contracts hangar and was taken the same day.
Behind the FE loader (center frame) is the Tiger Moth ZK-ASA (c/n 3630) of Air Contracts Ltd. This was originally ZK-AFO until impressed into the RNZAF for wartime service as NZ720.
Post war it became ZK-ASA with the Hawera Aero Club but was not used by them and went to Tom Withey who was an aircraft engineer with Air Contracts-  to whom it was registered on 20-04-1950.
Beyond is the fuselage of Air Services (Wairarapa) Ltd's Tiger Moth ZK-AYX which was soon to be transferred to Dave Phillpotts ownership.
In the right background are two of Manawatu Aerial Top Dressing's Cessna 180's (either ZK-BDB, ZK-BGG, ZK-BNE or ZK-BEL).

Regarding the two Fletchers that appear.
An educated guess would lead me to think that the Air Contracts one -with a rear view in the top pic and the forward half in lower shot - could well be ZK-BIK - known as the "Ruptured Duck", and The Air Services (Wairarapa) one could well be ZK-BIJ.

The third photograph looks towards the WRAC club house.
The two Tigers on the left are unidentified but a note on the rear mentions the Agricola ZK-BMK and the Auster ZK-AWU. 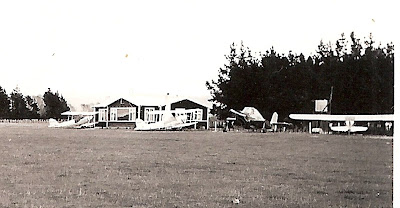 The Airlift (NZ) Ltd's Auster Agricola ZK-BMK (c/n B.103) was the one that Mike Daniels put into the Waingawa River shortly after tale off due to ice on the wings on 11-05-1957. It appears here wingless and with what looks like a damaged propeller. It was cancelled from the register on 26-09-1958.
The Auster rear view is of the Mk 5 ZK-AWU (c/n 1828) which at this point in time would have been with Eddie Enterprises and just before sale to D H Rutherford of Leslie Hills (North Canterbury) from 24-06-1957).
Posted by Dave Paull at 22:26