Yet another ex ERA Helicopters Eurocopter AS350B2 Squirrel has turned up on the Kiwi register - this time in the shape of ZK-IEP c/n 2844. It has been imported by BJ Comerford of Porirua and arrived at Ardmore's Oceania facility last month wearing its previous US markings of N186EH.

Unlike previous examples arriving into NZ from ERA Helicopters, this Squirrel is fitted with pop out flotation devices and is seen here test flying at Ardmore 15 September 2015. 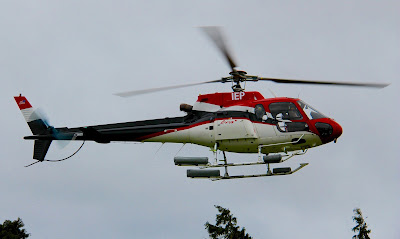