Registered to a private Auckland owner earlier this month is this brightly coloured Bell 206B ZK-IGD c/n 3323. This airframe has been an Ardmore resident for the last couple of years having first been noted in September 2013 wearing its previous Japanese registration and was registered
ZK-HJT in June 2014.


The Bell 206B JetRanger III ZK-HJT3 has been imported by Heliflite Pacific Ltd of Ardmore – a change from their usual Robinson import/exports. This was a 1981 build and was flown briefly under the N2009H test registration before being cancelled on 22-05-1981 as exported to Japan where it became JA9291 on the 26th with Nakan Nihon Koku at Fukui- It had a change of base to Shizuoka about mid-December 1995. Its Japanese marks were cancelled on 03-04-2013 for a move to Heliflite Pty Ltd at Georges Hall, Sydney, Australia where it was listed as VH-OCU on 14-05-2013. This registration was not marked on the exterior of this helicopter as it was noted at Ardmore in September 2013 still bearing the JA9291 marks. It was registered as ZK-HJT3 to Heliflite Pacific on 17-06-2014. The two previous allocations of the ZK-HJT marks were worn on Hughes 269’s.

As we can see the accompanying photo, the colour scheme is very similar to that worn by Australian based McDermott Helicopters.
http://www.mcdermottaviation.com.au/ 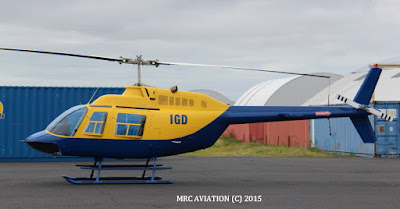