More on ZK-CEW and other Cessna 185s.

Continuing the Cessna 185 ZK-CEW story.
I have received these two photographs, from the David Phillpotts photo collection, showing  it "not long out of its box" at Bell Block, New Plymouth in June of 1963.
It clearly shows part of the hopper outlet beneath the fuselage - but as yet without the hopper fitted. 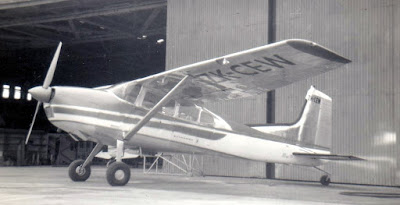 I also received this interesting note below from Ray Deerness.

At the time of importation of ZK-CEW there would have been restrictions on importing aircraft and they would have got around this by getting a hopper with it and it would/could have also been a replacement for a "crashed" aircraft unless they had a really good reason.
I'm pretty sure by the late sixties, all the Mt Cook 185's could be fitted with hoppers.
It was 1970 when the restrictions came off.
The restrictions for Ag aircraft came off in 1965, hence the influx of Beavers and Agwagons etc.

I would have to check the paint schemes, but some 185s arrived in an earlier paint scheme inferring that they had been stored for a while as Cessna had built too many 185s as floatplane versions, so Rural Aviation took them.
These ended up with Mt Cook and I remember someone at Mt Cook in the early 1970's saying that most of the skiplanes could be fitted with floats as well.
As well as the hopper hatches, they had the four lifting rings on the fuselage.

*****
Now that ZK-CBS has had a new hopper fitted of about 12cwt capacity, it will be interesting to see if we get any more Ag versions.

Below is another photo from the David Phillpotts collection showing the upper fuselage hopper inlet more clearly - this one on ZK-CEV. 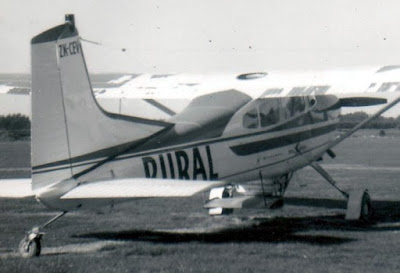 Ray goes on to say :-
If you look at Cessna 180 photos with hoppers, the hopper box/outlet is offset to one side.
With the 185, the centre part of the floor was removed and a fibre glass box inset fitted into the "hatchway". (from floor level to bottom of fuselage). Across the centre was a tube that the rudder/elevator wires were inserted. It was quite a major conversion.
All the topdressing aircraft were fitted with Easton hopper boxes.
Not long after the aircraft were introduced a spreader box was fitted around the hopper box.
The picture of ZK-CEV shows it without the fuselage spreader fitted but with a spreader, sort of a "Swathmaster" without the wings. I think this type of spreader was used for prills.
Most of the Mount Cook aircraft were used for carrots.
*******