Air Parts (NZ) Fletcher FU24 MKII ZK-CZA has been at Ardmore for the last few weeks having engine maintenance carried out. It was conducting an engine run in the rain on the afternoon of 26 June.

Blue Bus has the following to add:

Fletcher FU24 MkII ZK-CZA was an Air Parts (NZ) Ltd assembled aircraft, being registered on 09-09-1969 and went down to Wanganui Aero Work in October that year. Its last flight under its 300hp was on 17-11-1975 when it had a structural failure. It was then morphed onto a Fletcher 950M. Now jump forward to December 2008 when it was listed to Central South Island Helicopters Ltd. Near the end of the year (2014) it was transferred to Hallett Griffin of Kairanga Aviation. 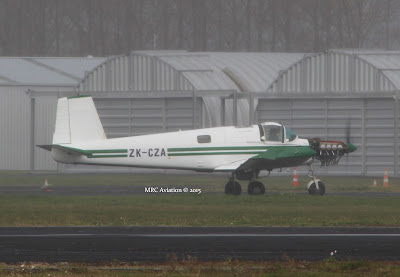 Still wearing the markings applied by its previous owner, ex TV weather presenter and New Plymouth Airport cafe operator Jim Hickey, is the Yak 52 ZK-ZAH. It is seen here departing Ardmore 26 June and departed via the downwind leg of the circuit heading east. An ownership change to Blue Fifty Two Ltd of Hamilton took place in April this year. 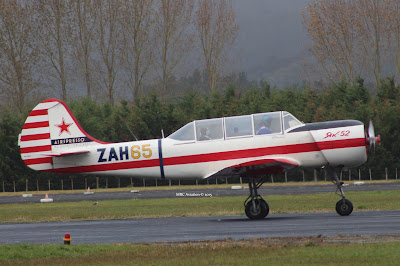