The Corby Starlet was the aircraft that broke the look of the mainly straight lines of Turbulents. Taylors and Jodel D 9s of the time - it was curvy and looked great (IMO). 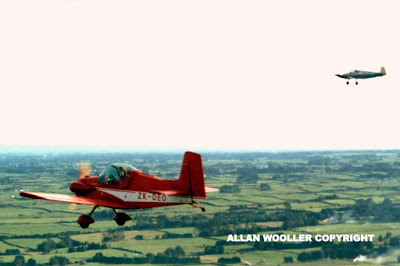 Our first Corby Starlet was John Buchanan's ZK-DEO which benefitted from John's great work in producing curvaceous moulds for the cowling, cockpit canopy wingtips and spats.  Many other single seat homebuilt aircraft adapted and used these moulds.  John is photo'd above flying ZK-DEO near Inglewood in 1978 with Jim Barrowclough's Jodel D 11 ZK-DBY. 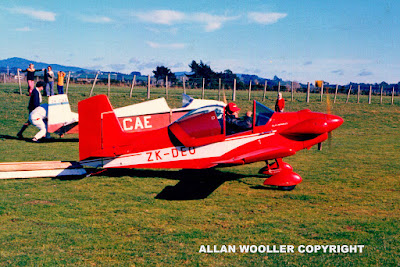 And here is a closer shot of John and his Starlet taken early on in its life, at Matamata in 1974.

You can see more about ZK-DEO and some other of our Starlets at www.nzcivair.blogspot.co.nz/2011/08/corby-starlets-of-new-zealand-1.html