The next type of single seat homebuilt to appear was the Zenith CH 100 Mono Z. We have had only one Zenith Mono Z in New Zealand to date, and I think it is unlikely that we will have any more.

The Zenith CH 100 Mono Z was designed by Chris Heintz in the early 1970's.  Chris Heintz was an aircraft designer who had worked for Avions Robin in France before emigrating to Canada.  The CH 100 was a single seat version of his earlier CH 200 of which we have had several in New Zealand.  It featured a large cockpit and removable wings, and could be fitted with engines from 55 HP to 100 HP.  The prototype first flew in Canada on 8/5/75.  Chris Heintz formed Zenair to market plans and kits for his homebuilt aircraft designs, and kits for the CH 100 were sold up to 1988. 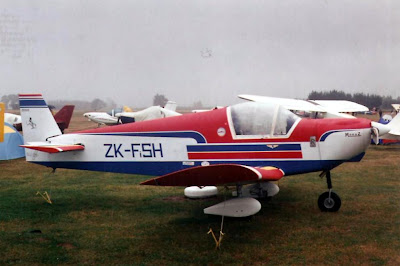