In 2009 an exotic import arrived in Wanaka from Switzerland.  This was the Jurca MJ-8 Focke Wulf 190 replica HB-YKZ which had been built in Switzerland by Gilles Kupfer over a period of around 5 years and which had first flown at Sion Air Force Base on 20/12/07.  It was registered ZK-YKZ in New Zealand. 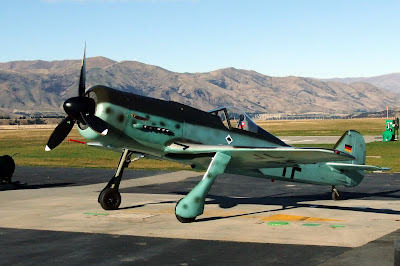 Thanks to Gilles Kupfer for the above photo which was taken at Wanaka on 1 May 2012.  Gilles has an excellent website detailing his aircraft at www.gilles-kupfer.com , and he can supply a kitset and Vedeneyev engine for your own 3/4 scale FW 190D replica if you want.  Contact Gilles through the website.