Following on from my earlier posts on FW 190 replicas in New Zealand, another amazing thing happened in early 2011 when a full size FW 190 replica arrived in Blenhiem from Germany.  This was the original Flug Werk replica that first flew in Germany in 2004.  Flug Werk was formed by Claus Colling and Hans Wildmoser to build what were essentially "late production models"of the Focke Wulf A8 - this was the short nose FW 190 with a BMW 801 radial engine. 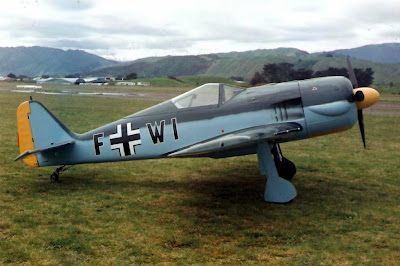 The 1/2 scale W.A.R Aircraft Replicas FW 190 ZK-FWI which I reckon looks quite realistic and is obviously a replica of a short nose FW 190.  Sadly this aircraft crash landed in a paddock near Levin on 22/6/12 following engine problems.  From photos the damage, while severe, seemed to me to be repairable so maybe we will see it flying again.  If anyone else wants a 1/2 scale FW 190, Gilles Kupfer has one for sale on his website www.gilles-kupfer.com (look under Projects, it is currently minus engine in Switzerland). 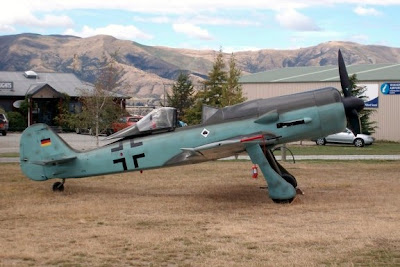 The 3/4 scale (Jurca MJ-8) FW 190D ZK-YKZ of Gilles Kupfer, which is also impressive.  You can see it is a replica of the long nose FW 190D model.  Thanks to Gilles Kupfer for the photo. 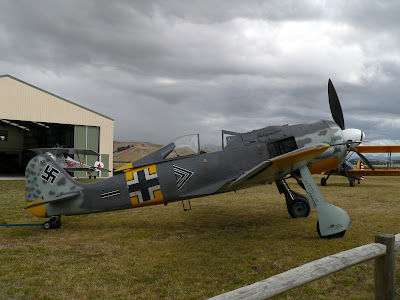