Inflite about to take flight!

Captured departing Airwork's Ardmore helicopter maintenance facility on the morning of 22 June was long time NZ resident AS355F1 Twin Squirrel ZK-HPA wearing the colours of yet to be launched Inflite Charters Ltd.  It is understood Inflite Charters will be a combination of three current air charter providers, these being Air National (no longer involved in flight operation), Skylink (Airwork NZ) and Helilink (also Airwork NZ).

Inflite Charters will initially operate a fleet of two Jetstream 32's and a Metroliner (hopefully these fixed wings will sport the same colour scheme) along with a Bell 427, Robinson R44's and this AS355 while Helilink will continue to operate the rescue helicopters at Auckland, New Plymouth and Wellington along with the two Police Eagle AS355's at Auckland and other associated support rotor wing machines.

Official launch for the new brand is early July. 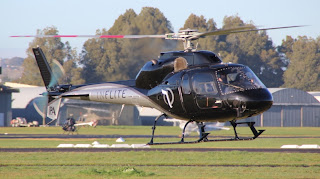