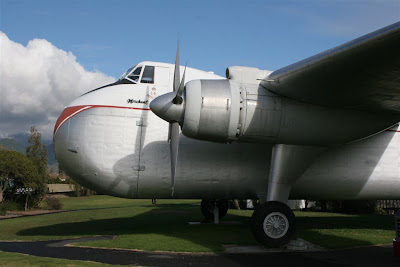 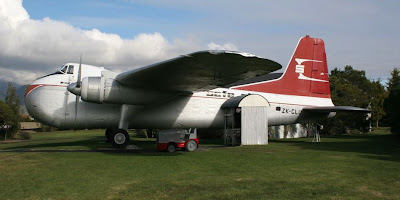 ZK-CLU has been mentioned previously at

I have received the following email (edited) from Jason D

"The reason for the email is ZK-CLU.
I see in the comments that someone reckons that she was moved to founders park in June 86. In actual fact you were correct with your dates of November 86.
How do I know this, because I was involved with moving it from the sand flats to her present resting site.
I was based in Woodbourne as an aircraft mechanic at the time in the airframe reconditioning squadron rebuilding Skyhawks and Orions. We were sent on a deployment to the Richmond A&P show that weekend and set up camp there to wave the RNZAF flag.
She landed on the sand flats on the Friday afternoon. We removed the outer wings and towed her to Founders along the main road. She had a wee mishap on the way there though. Prior to reaching the road the old girl got stuck in a ditch that was hidden in the scrub, it took a bit to get her out but we managed it and the rest of the trip was uneventful.
Once at Founders we proceeded to put the wings back on. The engines were replaced with timex'd units and the engines used for the trip across from Blenhiem were trucked back to Safe Air. The whole exercise was performed over the Show weekend which is and has always been the 3rd weekend in November.
Hope this clears up the confusion over dates for that poor misguided soul.
Regards"
Posted by Dave Paull at 19:25