The Bowers Fly Baby was designed by Pete Bowers in the late 1950's as an entry in an EAA design competition. However for various reasons the fly off for the competition didn't take place until 1962 and the Fly Baby won. Over 5,000 sets of plans have been sold over the years and the type is still pretty popular among Fly Baby afficionados. Pete Bowers worked for Boeing and was also a respected aviation historian.

The Fly Baby is a wire-braced low wing fabric covered design made from spruce and plywood. This is the Model 1A. It can also be built as a biplane in which case it is a model 1B or Bi Baby (not to be confused with Bye Baby which could have been another Jan and Dean song?). It is 18 feet 10 inches long (5.74 metres) and has a wingspan of 28 feet (8.54 metres). Its empty weight is 605 pounds (274 Kg) and MAUW is 924 pounds (419 Kg). It can be built with motors of between 65 and 100 HP, and its performance includes a stall speed of 45 mph and a top speed of 120mph (obviously depending what motor is installed and whether it is a Fly Baby or a Bi Baby).

The photos of ZK-FWO below are from the Keith Morris collection while ZK-OFB and ZK-CFB are from Colin Hay via Blue Bus. 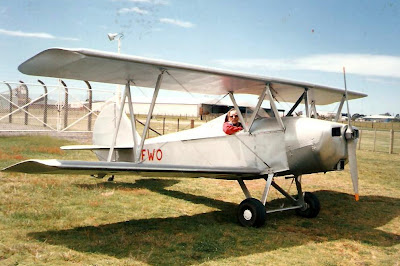 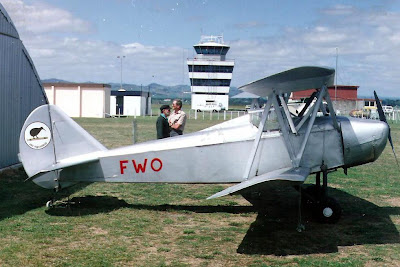 However it was repaired and it is photo's here at the 1992 AACA flyin at Tauranga, now with a canopy.  It was again damaged in a take off accident on 7/12/98.  Finally it was sold to the Coupe/McMillan Syndicate of Kaikohe with whom it is still current. 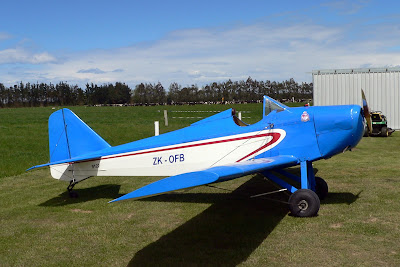 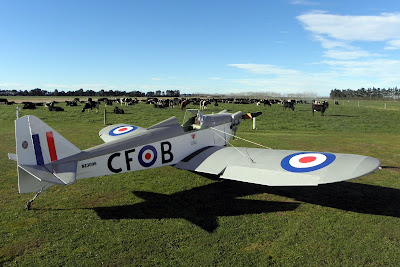