The RV 3 was developed by Dick Van Grunsven from his earlier RV 1 which was a modified Stits Playboy.  There is a link to the RV 1 (which has recently been restored) at www.wired.com/autopia/2012/03/predecessor-of-worlds-most-popular-diy-airplane-flies-again/#more-44190 .  Van Grunsven designed the RV 3in the late 1960's to be a better aircraft than the RV 1 in every respect, and he succeeded admirably.  The RV 3 has a low stalling speed of 51 mph but also has an amazing top speed of 207 mph on a 150 HP engine.  It is designed to fly with engines of between 100 and 150 HP.

The RV 3 suffered from some wing problems and kits were withdrawn from sale in 1996.  However a wing strengthening modification was designed and plans were made available again.  RV 3's that have had the wing mod are designated as RV 3A's.  And finally a new wing was designed and this has resulted in the RV 3B which is the current kit.

As of June 2012, a total of 274 RV 3's have flown worldwide, as per the Van's website "completed aircraft counter", and we have had 5 in New Zealand to date. 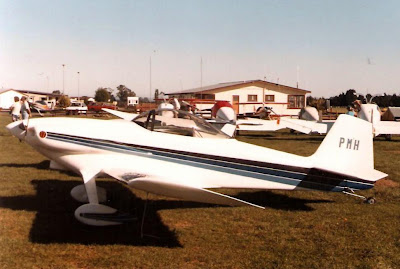 Our first RV 3 was ZK-PMH (c/n AACA/710), which was built by Philip J Higgins of Rotorua and was first registered on27/1/86.  (It was originally going to be ZK-PJH but that was not taken up and many years later Phil Higgins built an RV 8 and registered it ZK-PJH).  It first flew on 27/1/86 and was judged the Grand Champion aircraft at the 1986 AACA flyin at Matamata, where the above photo was taken.  It was sold to M J S Wilkins of Taupiri on 30/7/03 and it was re-designated as a Class 1 microlight on 13/4/04.  It is still current but I have not seen it for many years. 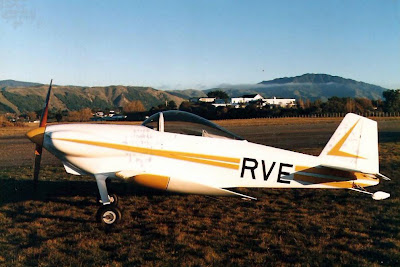 Our next RV 3 was Bryan Pool's ZK-RVE (c/n AACA/622) which was built in Wellington and was first registered on 29/10/86.  It first flew on 9/10/86 at Wellington Airport, with John Lanham as the test pilot.  It is photo'd here at Paraparaumu very early on in its life, in 1987.  It was re-designated as a Class 1 microlight on 6/2/01 for a short time but then reverted back to an Amatuer Built Aircraft (see comments from Igor Pool below), and Bryan Pool owned it for its entire life. 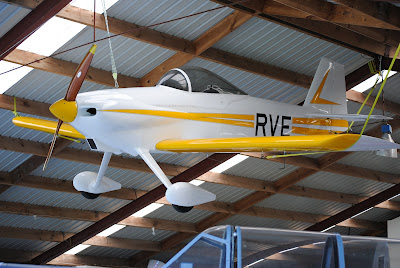 It was withdrawn from use in April 2012 and it is now suspended from the roof of the Classic Flyers museum at Tauranga Airport, as photo'd by Paul Kilsby on 5/5/12.  Maybe it needs the wing mod? 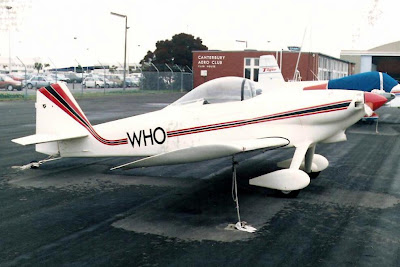 Our third RV 3 was ZK-WHO (c/n AACA/612) which was mainly built by apprentices of the Canterbury Aero Club and was first registered on R M A Healy of Christchurch on 16/1/89.  It is photo'd here tied down outside the Canterbury Aero Club in 1989.  It was sold to Topflight Aviation ltd of Rangiora (Jim Rankin) on 16/1/93  and then to the Rankin Partnership of Ohakea on 1/10/96.  It was re-designated as a Class 1 microlight on 11/10/02.  Somewhere along the line it suffered an engine failure and was damaged in the resulting heavy landing. 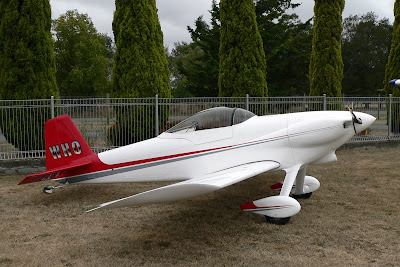 It was sold to G G (Gerry) Chisum of Hastings on 19/7/09, and he had the aircraft refurbished by JEM Aviation of Omaka including the wing strengthening mods and was repainted in this attractive colour scheme as photo'd by Blue Bus at Wings Over Wairarapa at Masterton 21/1/11.  It is still current. 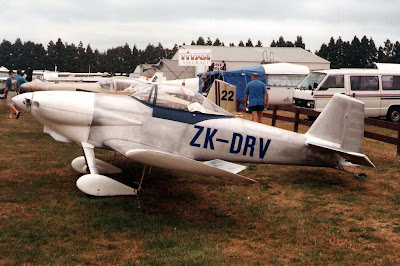 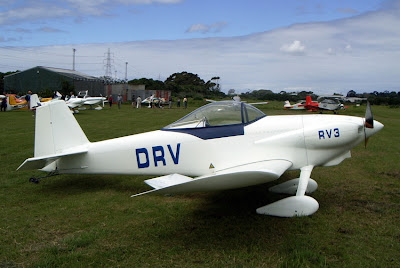 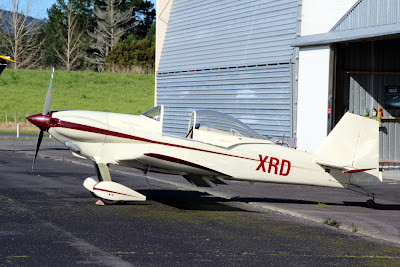 And our final RV 3 to date is ZK-XRD (c/n 682) which was built as N33RV by John Harmon of Harmon Rocket fame.  It was built with many mods as might be expected (although I understand that Dick Van Grunsven discourages his designs from being modified).  N33RV was cancelled from the US register on 20/10/09 and was registered in New Zealand to North South Outdoors Ltd of Turangi, on 21/10/09.  It was sold to the Alan Turner Family Trust of Auckland on 1/9/10.  It is based at Ardmore where Mike Condon took this photo on 17/7/11.

I expect we will see more RV 3's on the New Zealand register, and I recall hearing about a damaged ex-US example at Tauranga (?).  But they will never appear in the numbers that other Vans aircraft will appear in.  I reckon the RV 3 is a great looking aircraft.